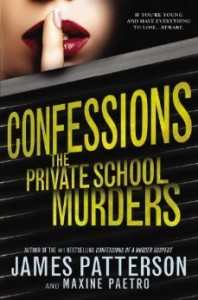 Tandy Angel, along with her three brothers, Hugo, Harry and Matthew, are still recovering from their parents’ suicide and the fact that the reason why they were all so brilliant was because of Angel Pharmacy’s drugs. But their worries are far from over. Matthew lands himself in prison for supposedly murdering his star actress girlfriend, Tamara Gee, and the worst part? He doesn’t even know if he did it or not. Soon, Tamara’s murder leads to even more deaths, and while the media doesn’t notice the connection, Tandy does, and is determined to find the culprit. One day, she finds some support when her brothers and she get a mysterious new guardian named Jacob Perlman. Feeling just a bit more confident in her abilities, she looks for more clues in her deceased dad’s office, only to be nearly attacked by a venomous viper. That’s not all, because while she’s searching for the murderer, she also stumbles across clues from James, her past lover that she had forgotten, due to her former parents. With Matthew’s trail, the murder cases, vivid flashbacks from the past that was taken from her, and love letters from James stacked on her plate, she also searches for herself, and who she was before her parents had drugged her.

MY OPINION:
Confessions: The Private School Murders was the second book in the Confessions Series, but if you did not read the first book, James Patterson and Maxine Paetro made it easy to catch on. The book was a mystery that followed the one after the first book, and I must say, it was riveting and left me on the edge of my seat. It always left me wanting more and I had to hold myself from flipping from page to page when I had passed each section limit.  In a mystery, you never know who the culprit is, and their culprit was someone I had never suspected. They drop tiny hit by tiny hint and it makes you key into the small details. Patterson and Paetro both made good word choice, and had supported them with context clues. I think that students ranging from 12-17 would enjoy this book at its peak. There’s some certain language that doesn’t quite fit for ages eleven and under, and they imply some content that shouldn’t be exposed to anyone under twelve years old.  I would rate this book 9 out of ten stars.

FIRST SECTION
1. What crime did Tandy’s brother, Matthew, supposedly commit to land himself in prison?
1a. He was charged for killing his actress girlfriend, and her unborn child. (pg.2)
2. Harry tells Tandy that a girl has died. Who was that girl?
2a. Adele Church. (pgs.17-18)
3. When Tandy arrives home, she sees a man standing in their apartment. Who is this man, and what is the Angel’s new relationship with him?
3a. Jacob Perlman, the Angel’s new guardian.
4. When Tandy tries to negotiate with her little brother, Hugo, he reluctantly agrees and helps Tandy solve the case by looking through the file cases. But he jumps back and screams. What was in the file cabinet and what happened to it?
4a. A cobra. (pg.75) Jacob shoots it and hands it over to Pest Control. (pgs.80-88)
5. After arriving home from Matthew’s trail, Jacob is very mad with them. Why is he mad, and how does each Angel feel after Jacob forgives them?
5a. Jacob was very worried and angry because they left the house without telling him. He had called the police and their school because he did not know where they were. (pgs.110-113) Jacob grounded each of them, and none of the Angels expected this. They were used to bigger punishments from their former parents, but and the Angels thought that “grounding” was too soft. They all think that Jacob actually likes them and that he does not mind taking care of them, considering that they were all once murder suspects. The three go to Jacob’s room and try to convince Jacob to forgive them. Harry and Tandy both feel surprisingly guilty when they apologize and Hugo even cries. (pgs.114-116)

MIDDLE SECTION
6. When Tandy leaves the house, she tells Jacob she would be home by seven. Where and why does she leave the house?
6a. Tandy goes to Phil’s office so that she can look for any clues to where James, her former lover, could’ve gone. (pgs. 148-157)
7.Why does Jacob understand Tandy when she tells him about James?
7a. Because Jacob had also experienced a painful love when his lover died in a firefight when he was twenty one. (pg. 177)
8. Tandy searches up James Rampling on Google and finds results that says he’s gone missing.  She searches for his location on the articles and finds out that he was attending a private school in Europe. What does she do when she discovers this?
8a. She composes an email to all the headmasters of the private schools and asks if James is attending one of their schools.(pg. 208)
9. Harry decides to give Hugo one of his most prized possessions. What is it and why?
9a. It was The Seal of Approval, something that had been given to Harry for a piano recital the he had performed best in. (pgs. 235-236) Harry decided to give it to Hugo because he had spent so much time finding ways to bail Matthew out of jail. (pg.238)
10. In one of Tandy’s flashbacks, she runs away from New York and her parents with James. They escape to a vacation home James owns and they are happy until people commanded by Maud and Malcom take Tandy away. Where do they take her and what happens to her there?
10a. The people take her to a place called Fern Haven. It is a correctional facility, where they force-fed her truth serum and they gave her “therapy sessions” where they fried her brain to get rid of her memory of James. (pgs. 266-269)

LAST SECTION
11. In order to gain access to a certain floor in The Dakota, their apartment building, she must bribe someone. Who is this someone and what does she bribe him with?
11a.  It was her personal driver, Virgil, who was now a doorman. Tandy bribed him with ice cream she remembered he loved back when he was working for the Angels.(pg. 276)
12. Tandy has received an email back as a result for her searching for James. Who was it from and why was the content in the email so important?
12a. It was from Royal Rampling, James’ father and it said that James was in Europe, living the life he should have been living, secure in a private school and happy with a girlfriend. (pg, 298-299
13. Tandy goes to Giuseppe’s Pharmacy and question’s how affective Marla’s pills were. After getting no answers, she leaves the pharmacy but soon gets confronted. Who was she confronted by and how? Who saved her?
13a. One of the pharmacy workers named Gary. He pulled a gun to her head and would  have killed her if Jacob didn’t come to rescue her just in time. (pg. 338-339)
14. Who killed Tamara Gee, Matthew’s girlfriend? How was he caught?
14a. Troy Wagner. Troy had half fingers. When Tandy found the dumbwaiter in Matthew’s apartment, she found a dumbwaiter. On the dumbwaiter walls was a bloody handprint with prints from half fingers. (pgs. 358-362)
15. Jacob takes to them to a place to get their minds off of family business. Where he does he take them and why?
15a. He takes them to Paris. Their Grandmother had left them a house there and it was written in her will. Jacob takes them to Paris so they can stay in their Grandmother’s house for a while and decide whether to sell the house.(pg. 397-400)