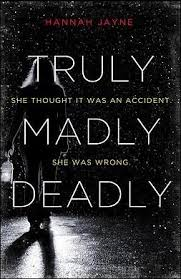 Sawyer Dodd, a 16 year old high school student,  lives with her dad and stepmom, Tara, and are expecting a new baby girl. Sawyer is a straight-A student with a close friend named Chloe who always watched her back. Sawyer’s mother passed away because of cancer, which affected her. Her father married a woman named Tara, but Sawyer is not used to having a new mother living with her. Throughout Tara’s stay, Sawyer learned more about her character which helps Sawyer see Tara as a mother and not a stranger. Other than Sawyer’s family life, she is going through many dark sides of her life such as death of her friends and family. Sawyer does not realize that someone is following her steps until she received anonymous notes in her locker. The notes make her believe that she is responsible for everyone’s death. Throughout her high school year, many of her friends either died or have been hurt. Sawyer is not only scared but worried that she will be the next victim.

The book, “Truly, Madly, Deadly,” was full of mystery and suspense which made the book enjoyable. The main character, Sawyer Dodd, went through a challenging year of high school with many deaths and anonymous notes in her locker. The best part about the book was when there were many mysterious deaths of Sawyer’s enemies and teachers. It was enjoyable to read about how Sawyer receive clues and struggles to find out who has been scaring her. At some parts of the book turned out to be very boring which made me lose interest in the book. The book is best suited for ages twelve to eighteen. I would rate this book eight out of ten.

1. What is the main characters name?

2. Why did Sawyer move to her dad’s house?

2a. Her mother died because of cancer.

3. How did Sawyer’s boyfriend die?

3a. He got into a car accident.

4. What was Sawyer’s boyfriend’s name?

4a. His name was Kevin

5. Why did Sawyer’s friend get cut up?

5a. Someone attacked her.

1. What was on the note in Sawyer’s locker?

2. Why did Sawyer pass out?

2a. She thinks she killed her Spanish teacher.

3. What is Sawyer’s Spanish teacher allergic to?

4. Why was Sawyer in a daze while walking to her first class?

5. Why does Sawyer think she killed the Spanish teacher?

5a. She was eating peanuts in front of him.

1. Why did Chloe call Sawyer to her car?

1a. To tell her that Maggie killed herself.

2. Why did Maggie kill herself?

2a. She could not handle anymore bullying.

3. Why did Sawyer go to the police station?

4a. She is Maggie’s sister.