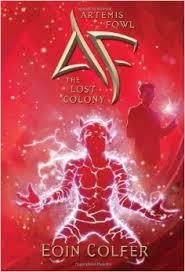 Artemis was standing in the middle of nowhere waiting for a mysterious guest, his calculations were off so he encountered the guest, who was a demon twenty feet away and traveled through time. Meanwhile underground, Holly, a former LEP soldier, was trying to catch a fish smuggler with her partner, Mulch, who was a dwarf. They failed at catching the fish smuggler. But they also encountered section eight’s captain, Vinyaya. They went inside of their secret area where they were tracking Artemis because they knew he was up to no good. On an island in the middle of nowhere, there was a  demon who could not warp like his brethren. His name was No.1. He has seen so many demons warp in front of him, but he could not warp no matter how hard he tried and he believed he was a warlock. The demon leader Abbot obviously did not believe No.1 until Abbot saw he had magic. So he decided to mesmerize No.1 to jump in the volcano and die. But he fell through time instead and arrived in the human world where he was held hostage at a young genius’s house. Her name was Minerva, along with a bodyguard named Billy Kong, who believes demons killed his brother so he wanted to kill the demon. Time itself was unraveling and falling apart, so Artemis and Minerva have to team up and save the world.

MY OPINION:
When I first got the book, I felt excited because I was finally going to read it after waiting for it to arrive in my mail. When I read the book, it felt like a movie playing inside my head with vivid details and pictures.The characters were screaming, talking, fighting, battling with each other. I was really shocked towards the ending because there was a couple of twist I was not expecting. I think I would recommend this book to fifth, sixth and seventh graders, or even fourth graders if they are looking for a challenge. It was overall a good book with good details with all kinds of good words vocabulary words for people to learn. If I could travel back in time, I probably will not chose this book because it was pretty easy. I think the details in the story is great, and I will rate the book eight out of ten stars.

1.Why did artemis stand in the middle of nowhere?
1a. To wait for a mysterious guest
2. Why did Holly’s confidence drain to her boots?
2a. She wasn’t in the LEP anymore, so she didn’t have her gun to defend herself.
3. Why did the pixie stop the multi-mixer when he had the chance to kill Holly?
3a. Because he is afraid of  seeing blood, also he is a smuggler, not a killer.
4. Why was the traffic cop excited when Holly told him there was blood?
4a. Because he belongs to the Lower Elements, if he reports this incident to the cops, he will be promoted to higher ranks and considered more “important”.
5. Why didn’t commander Vinyaya answer Mulch’s question?
5a. Because they got high quality security cameras watching Artemis’s every move.
6. Why did Mulch have to entertain the little boy?
6a. So the rest of the team can sneak into the building.
7. Why did Butler choose the bush as a hiding spot?
7a. Because he knew the rock hiding spot would be booby trapped
8. Why/How did Minerva know that they were behind the bush instead of the rock?
8a. Because she knew that every bodyguard will choose the farthest and safest hiding spot when i come to protection someone.
9. Why did Minerva give Abbot the fiction book and the crossbow when they had much more advanced weapons?
9a. So that they can fool Abbot and his demons, tricking them into thinking that the humans do not have powerful weapons to defeat them.
10. Why did Billy Kong shoot No.!
10a. Because he was he was running out of patience and thinks the demon is talking foolish about books in another language.
|11. Why does the demon has to have silver in or on him?
11a. To anchor him in the current dimension.
12. Why did Minerva walk over to Billy Kong when Butler told her not to?
12a. Because he harmed her dad and blew up their building so she wanted to get revenge.
13. Why did Butler fake himself and Minerva as normal citizens?
13a. Because he didn’t want to be held in prison after what happened to Artemis.
14. Why did everyone turn to Artemis?
14a. Because they expect Artemis to always have a backup plan. Also, he the tallest in the group so they naturally think he is a leader.
15. How did Abbot acquire his warlock powers when demon can’t have magic after they warp?
15a. He gained magical powers when he and Qwuan’s student fell into the volcano and got zapped in the time hole and merged together.