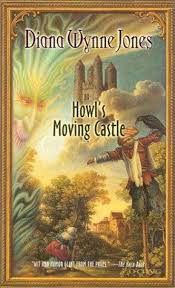 In the magical land of Ingary, where anything can happen, there lived a family of hat makers in a town called Market Chipping. Sophie Hatter was the eldest of the three sisters, which was unlucky because it was believed that the eldest child had the worst luck. Lately, a giant, moving castle, rumored to be the home of the evil wizard Howl, has been seen around the outskirts of town. One day Sophie is working at the hat shop when a strange lady comes in to buy a hat. When the lady, who turns out to be the feared Witch of the Waste, is not satisfied with any of the hats, she turns Sophie into an old lady. When Sophie realizes that she was cursed, she leaves the town in an attempt to start a new life. Sophie finds her way into Wizard Howl’s moving castle, and meets a fire demon, Calcifer, and Howl’s apprentice, Michael. Calcifer promises to break Sophie’s curse if she can break a contract that he made with Howl. Sophie is mystified by the castle and the magic, but when Howl returns, he is angry at Sophie for barging into his castle and organizing his belongings. Howl is so mad that he uses his magic to create green slime, mess up the house, and enrage Sophie and Michael. After a while, Howl calms down, and Sophie’s real magical adventures begin. She tries to help Michael with a spell he’s completing, and even plays the part of Howl’s grandmother to negotiate with the King! Later, Sophie realizes that Howl is in love with her sister, Lettie Hatter. She also becomes caught up in the conflict between Howl and the Witch of the Waste. Whatever can happen will happen in this crazy, magical adventure!

MY OPINION: Howl’s Moving Castle is a very interesting and captivating novel. The four main characters, Sophie, Howl, Michael, and Calcifer, all interact in interesting ways. In this world of magic, there are many secrets. For example, Howl never knows about the deal Sophie made with Calcifer. Although the storyline may seem random and strange, it all leads up to a great finale with the defeat of the Witch and the return of Prince Justin and Wizard Suliman. Even though this novel is great in terms of the vocabulary and the describing of the characters, the storyline is vague, so it is hard to understand and follow the events in the book. Even though the vocabulary is hard, it is not difficult to guess the meanings of the words using context clues, so any person above the age of 12 should be able to read this book with little difficulty. If I were given a choice, I would definitely re-read this book. Overall, I would rate this book eight stars out of ten.   STUDY QUESTIONS AND VOCABULARY: FIRST SECTION 1. Why did Martha switch jobs with Lettie? 1a. They swapped because they did not like the fates they were given. 2. Why did the Witch of the Waste cast a spell on Sophie? 2a. She did not like any of the hats in the hat shop. 3. Why does Calcifer let Sophie cook breakfast? 3a. Sophie threatens to tell Howl about their deal. 4. Which door leads to Howl’s secret hideout? 4a. The door with the black paint splotch. 5. Why does Howl produce green slime in the castle? 5a. Howl is angry because Sophie organized the bathroom, mixing up the spells and slightly changing the color of Howl’s hair. turrets (pg. 3) roving (pg. 3) ravenous (pg. 54) flamboyant (pg. 56) besom (pg. 64) MIDDLE SECTION 6. Why is Michael alarmed when Howl says he’s in love with Lettie? 6a. Michael thinks that Howl is in love with the same Lettie Hatter that he loves, but in reality, Michael is in love with Martha, while Howl is in love with the real Lettie. 7. When Howl sees the spell that Michael is trying to complete, why is he scared? 7a. Howl recognizes that the spell is a curse in disguise, sent by the Witch of the Waste. 8. Where does Howl’s secret hideout door lead? 8a. The door leads to Wales, Howl’s homeland. 9. Who does Howl bring Sophie to meet? 9a. Howl brings Sophie to meet his teacher, Mrs. Pentstemmon, and the King. 10. Why does The Count of Catterack thank Sophie when he meets her? 10a. Sophie sold him a fake spell that supposedly helped him win a duel. heather (pg. 113) cowpat (pg. 120) embroidered (pg. 176) coy (pg. 181) glib (pg.188) LAST SECTION 11. Why is Howl’s suit ruined? 11a. Michael’s enlargement spell makes it too large for Howl to wear. 12. Why did Sophie slice up Howl’s old suit? 12a. Sophie realizes that she accidentally charmed the suit, making it irresistible to all women. She is appalled at this, so she decides to destroy the suit. 13. Why does Howl move the castle next to the Waste? 13a. He tries to do the unexpected so the Witch won’t catch him. 14. How is the scarecrow able to run to the Witch’s fortress? 14a. Sophie used her magic to give it ten times its former speed. 15. What do Howl and Sophie sell at their shop in Market Chipping? 15a. They sell flowers, gathered from the edge of the Waste. whitewashed (pg. 220) verbena (pg. 228) doleful (pg. 249) banister (pg. 287) emanation (pg. 311)