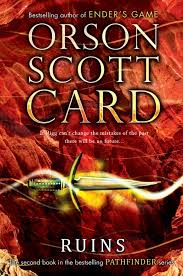 Rigg, Param, Umbo, Loaf, and Olivenko continue on their journey on the planet Garden, a human colony created to establish insurance of the prosperity of the human race, after they leave Ramfold to escape the government. They first meet the expendable Vadesh, an exact copy of Rigg’s father, though. Though he is untrusted, they are forced to rely on him for water and supplies, but they attempt to leave when they find out he killed all the humans in his wallfold. Rigg takes command of the ship and all the expendables using a the control gems, giving them access to the wall’s controls. They fly to the Odinfold where they are met by genetically modified people, and they hear the truth about the fate of their planet. They continue to receive “future books” from the future, where the visitors from earth read the logs from the planet’s computers. Then, two years later, the destroyers come, wiping out all life on Garden for a n unexplained reason. They try genetically modifying themselves to seen unthreatening, and other things, but every time when they go back in time, the same result occurs. They also learn that using the power to transport objects anytime and anywhere, Umbo, Param, and Rigg were all genetically modified as a fetus by placing the DNA of Ram Odin in their cells. Because they are the only people who can save the world, they have to try to prevent the “Destroyers” from coming, and have to work together as a team.

This book is a good and easy read, and is an excellent sequel to Pathfinder. I like how the author gives the characters powers over time, a seemingly unmatched power, while throwing in conflicts and troubles that can not be solved by redoing the past, whether it would be the solidity of the team and the trust they should share, or a superhuman other who can also manipulate time. In this book, everyone in their team will have to learn to trust each other, grow as a person, and learn not to have to rely on manipulating time. For example, when Param is frightened, her gut instinct is to disappear. Later in the book, she learns that she can not solve her problems by running away and hiding, but she would have to learn to face her problems. I would recommend this book to twelve to sixteen year-olds, because not only does it requires the reader to think philosophically, but also makes the reader need to try to sympathize with the characters. I would rate this book a nine out of ten stars, as it is an easy read that touches on many deep subjects and different views of people.

1. Why does Umbo resent Rigg?

1a. Rigg often is the leader and is the most educated and most talented of the group, even though Rigg recognizes this in Umbo and tries to act more down-to-earth.

2. Why can’t they trust Vadesh?

2a. Because Vadesh tries to manipulate them and attempts to amplify the conflict between the group.

3. Why does Rigg trust Ram, even though he is an exact copy of Vadesh and lied just as Vadesh had?

3a. Because Ram is the being that raised him as his father, and even through all Rigg has learned about the truth, the trust between them still remains from his childhood.

4. Why does Param temporarily leave the group?
4a. She doesn’t want to be part of the decision of whether or not to trust Vadesh, nor does she want to be involved with the conflict of it.

5. What is Rigg’s dilemma involving the progress of the plot?

5a. He has to choose between removing the facemask of Loaf or removing the walls to take further responsibility of the fate of humans and increasing the resentment of Umbo towards him.

1. What is Umbo’s main inner conflict?

1a. Umbo resents Rigg because everyone follows him and views him as the leader, but at the same time has no legitimate reason to hate him

2. Why is Loaf so harsh to Umbo on the ship?

2a. Umbo is completely out of his mind and needed to be exposed to the truth

3. What is Param’s main inner conflict?

3a. Param views herself as a princess, born into royalty and entitled, but in reality, she isn’t worth anything because they aren’t even in the kingdom, and they are a team.

4. What is the conflict of the book?

4a. The components of Rigg’s party can not work together, and they resent each other for various reasons.

5a. Loaf knows they can go back in time to save her before she is killed.

1. Are the expendables evil?

1a. No, they are machines who act under orders to preserve the human race, but seem unethical

2. What is wrong about Rigg’s prediction?

2a.  He thinks Ram Odin wants to destroy earth

3. What is wrong about Umbo’s prediction?

3a. He thinks the mice try to board the ship to spread a contagion to wipe out Earth life.

4. Are the mice really mice?

4a. No, they are human consciousness bred into mice

5. What is the main thing Rigg learns throughout the book?

5a. Some things such as feelings, can not be undone by time travel