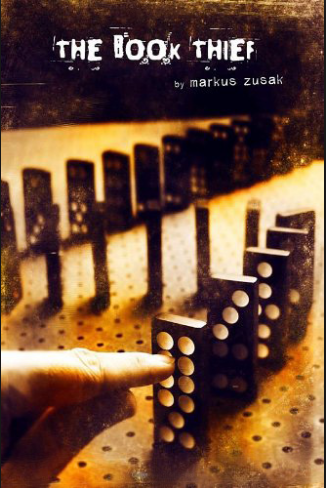 The Book Thief by Markus Zusak is a fascinating story set in Nazi Germany during World War Two and narrated from the point of Death. Liesel Meminger, a nine-year old girl on her way to Munich, realizes that her little brother, Werner, is dead. They have nowhere else to bring Werner, so he has to be buried in a nameless town two days later. It is by Werner’s grave that Liesel “steals”, or finds her first book, The Grave Digger’s Handbook. When Liesel arrives at Himmel Street, where her new home is located, she meets Hans and Rosa Hubermann, her new parents, and Rudy Steiner, her future best friend. Liesel starts to adjust to her new life and obtains a few more books in the process: three from her father, one from a Nazi book burning, and three books and one dictionary from the mayor’s library. One day, a Jew, Max Vandenburg, shows up on her doorstep. Liesel quickly befriends him, but she knows that it is a crime to the German government to hide a Jew. On the surface of things, Liesel’s world seems to be shut down - she must keep the secret of the Jew in her basement or risk dire punishment - but on the other hand, Max helps her discover what a wonderful person she is and gives her two books made from the pages of Mein Kampf. Liesel starts to steal books from the mayor’s library, but when she destroys one of them in a fit of anger, the mayor’s wife gives her a blank book to write her own story in. It was the writing of this book that saved her life in the end.

When I opened The Book Thief to the first page, I could not stop reading for an hour, and I finished the book in two days. The unique point of view from which this book is narrated easily caught my attention. The setting and time of the world which the main character lives in is also rather unique: most books about Nazi Germany are told from the Jews’ point of view. I especially liked how Death narrates his story of Liesel, starting with the three times he saw “the book thief”, as he calls her and slipping in some of his own views and experiences. There are also some interesting quotes from Death, including him telling the reader to look in the mirror if they really want to know what he actually looks like. This book is best for people ages ages twelve to sixteen. I would rate this book ten out of ten stars.

2. What does Liesel find by her brother’s grave?

2a. The Grave Digger’s Handbook.

3. Where is Liesel’s new home?

5. Why does Hans Junior leave during Christmas?

5a. He thinks his father is a coward.

6. Where does Liesel first drink champagne?

6a. At a house that Liesel’s papa painted.

7. Who is determined to win all the races at the Hitler Youth carnival?

8.  In Liesel’s eyes, who is the best accordion player?

9. Who wrote The Standover Man?

10. What does Max paint on the wall of the basement?

10a. The description that Liesel gave him of the weather one day.

11. Whose fathers are going to join the army?

11a. Rudy and Liesel’s fathers.

12. What does Rosa hold when she prays in the kitchen?

13. What does Rudy do when the Jews are marching through the town?

13a. He puts bread on the road for them.

14. Where is The Word Shaker hidden?

15. Why does Reinhold Zucker die?

15a. He was sitting in Hans Hubermann’s seat.