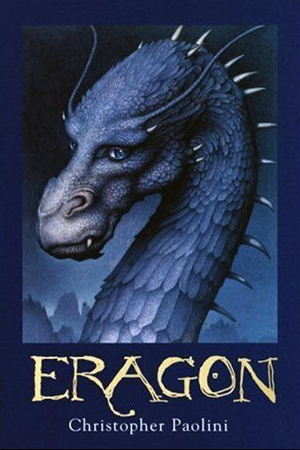 Before an evil king rose to power, there was peace. Riders and dragons coexisted side by side, dwarves and elves flourished, and evil was kept at bay. Then, a Rider named Galbatorix turned. Generations later, fifteen year old Eragon finds a blue, polished stone in the forest while hunting in the woods and hopes it is worth some money to pay for food. After the “stone”, which was a dragon egg, hatched, he left behind his simple hunting life for a Rider’s legacy. The dragon, which Eragon names Saphira, becomes friends with Eragon and hides in the woods. Saphira and Eragon develop a deep link and connect with each other through their minds. Saphira is growing when two mysterious visitors stop by where Eragon lives to ask about the stone. Sensing danger, Eragon flees with Saphira before coming back for his family. Eragon learns that the mysterious figures, the Ra’zac, have killed his uncle, and he becomes set on avenging him and journeys off in King Galbatorix’s Empire with the intent to pursue them. His guides across the Empire are a sword with a mysterious past and an ancient storyteller with an even more mysterious one. The storyteller, Brom, tells him the story of Galbatorix and coaches him in magic. Together, they manage to navigate their way across the Empire. During his journey, he has his fortune told as “tangled and cloudy”, he is captured but escapes, he rescues an elf, and he travels across deserts to an alliance group which opposes Galbatorix, the Varden. He meets elves, dwarves, urgals, shades, and more strange creatures in the strange world he once called home. (273)

Eragon is similar to Harry Potter in style because of its complicated plot and unique names. It’s pleasant to read, and although there are several words that are more ninth grade level, there are enough context clues to figure out the close meaning of it. Unlike Harry Potter however, the plot thickens and an appropriate pace as the series goes on. Eragon was sometimes difficult to keep up with because the pace moved a bit fast. A big factor of it moving too fast is the different names. The names used are introduced quickly and in great quantity, so I sometimes had to reread parts I previously read because I forgot what a name or fact was. The best part of the book is the fact that I keep wanting to read the next book in the series, and although it sounds cheesy because it sounds like a simple medieval dragon classic, it is far more interesting than anticipated. This book is best suited for eighth grade and above because of higher vocabulary level, but the story itself would be interesting for all ages. I would rate this book nine out of ten. (193)

1. How old is Eragon, and what did he originally do for a living?

1a. Eragon is fifteen years old. He hunts for a living while living with his uncle and cousin. He is the only person who hunts in The Spine. (pg 6-7)

2. Why did Eragon pick up the blue stone in The Spine and bring it home?

2a. Eragon picked up the blue stone and brought it home because he thought he could sell it for money. (pg 8)

3. What story does Brom tell at a trading gathering?

3a. Brom told the story of Dragon Riders. Dragon Riders were powerful and magical, successfully creating peace over an empire. An exceptional Rider named Galbatorix was proven extremely powerful and rose in Rider ranks. He grew reckless and went into Urgral territory (enemy). His dragon was slayed, and he became insane by the loss. After suicide attempts, he also attempted to ask the Riders for another dragon. However, after seeing Galbatorix’s state of mind, they refused. Galbatorix, through his madness, believed the Riders were at fault for killing his dragon. He plotted revenge with the help of a sympathetic Rider who was soon twisted by Galbatorix’s words. He turned sides to Galbatorix and together, they killed an Elder of the Riders. Galbatorix ran after killing his companion and found Morzan, another Rider. Together, they rose and fought other Riders. Twelve other riders joined Galbatorix and became the “13 Forsworn”. Vrael, the leader of the Riders, was the only one powerful enough to defeat Galbatorix. However, his mercy towards Galbatorix was turned against him and he was killed. Galbatorix is now King of the empire. (pg 31-34)

5. Why is Eragon leaving carvahall?

5a. Eragon is leaving Carvahall because he wants to pursue the Ra’zac, the people who killed his uncle looking for Saphira in his house. Also, the people in Carvahall were becoming concerned with the evidence of Saphira’s presence. (pg 99)

6. Why is the King wary of Eragon?

6a. The King is wary of Eragon because he is the only other Rider known alive besides Galbatorix. He wants to first offer Eragon a chance to serve him.(197)

7. What is Eragon’s fortune?

7a. Eragon’s fortune is “tangled and cloudy”. It is told by Angela, and she tells Eragon how he could go on many paths, but all paths are bloody and conflicted, and only one path will bring him to happiness. He will live a long life because he is a Rider. Death approaches rapidly along with grief, but so does a great journey. He will encounter love and betrayal. He will leave Aglaësia, his home, forever. (203-204)

8. What are Eragon’s dreams about?

8a. Eragon keeps dreaming about seeing a woman in a cell. A technique called “skyring” can be used to bring up an image, but it is odd because he has never seen this woman before. (212,233)

9. Who does Brom and Eragon meet during their travels?

10. Where was Eragon taken after being captured by the Ra’zac?

11a. Arya is in a “sleeping” state because she is poisoned and the dormant state slows down the process. She was given the poison in her captivity in Gil’ead and also given the antidote, but Eragon and Murtagh rescued her before her dose of antidote was given. (340)

12. Why does Murtagh refuse to meet the Varden?

13. Who is the leader of the Varden? The elves? The dwarves?

14a. Arya was angry at the twins because in order to perform the task that he was (unjustly) set to do, he had to know his true name. If your true name is known, the person who knows can easily dominate you. The Twins were trying to trick Eragon and use him to their advantage, and Arya knew it.

15a. Eragon’s side won (for the time being) but was scarred for life (literally). He also realizes there is more danger to come.