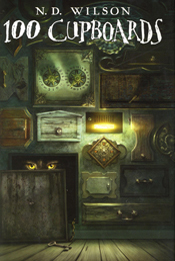 THE STORY:
Henry York, a twelve-year-old boy, is staying with his Aunt Dotty, Uncle Frank, and three cousins Penelope, Anastasia, and Henrietta, because his parents have been kidnapped while biking. One night, he sees an elderly man enter his grandfather’s room, which has been locked since his death. Another evening, he discovers that the plaster of the wall started peeling off. It unveils a hundred cupboards with two compass dials. Henry and Henrietta discover a key to Grandfather’s room in one of the cupboards, finding a journal with a map of the cupboards. Henrietta opens a cupboard that leads to a place named Endor, and someone at the other side grabs her arm. Henry tries to free her arm, but the person snatches Henry, so he cuts the person with his knife, also accidentally cutting himself. One morning, Henrietta disappears, and Henry reads Grandfather’s journal, which tells how the cupboards work. After going into multiple places, Henry finds Henrietta in a ballroom of a ruined city, but they cannot return since the compass dials have been turned. Uncle Frank discovers that Henry and Henrietta traveled through the cupboards, and begins to look for them. However, a witch, strengthened by Henry’s blood, emerges from the Endor cupboard before stabbing Frank and causing Aunt Dotty to collapse. Henry and Henrietta manage to escape the cupboard, but they have to defeat the witch from hurting everyone.

Before I started reading, I imagined that the book would be about adventures traveling through the different worlds, and it would be very exciting. However, as I read on, I felt slightly disappointed from the plot, since it is not particularly interesting, even though the backstory is well set up. It sometimes does not explain what happened very well, so it is easy to accidentally miss a part and not understand how something happened. The vocabulary also is not very strong, since it only uses basic words and occasionally a slightly tougher word. On the other hand, the author used a voluminous amount of literary techniques, especially metaphors. It allows me to easily see what was happening. Additionally, I believe the book still compels the reader to continue reading it, despite having a feeble plot. I would recommend this book to older elementary school students and younger middle school students due to its weak vocabulary and poor plot. Overall I would rate this book seven out of ten stars.

1. Why is Henry living with his aunt and uncle?
1a. They got taken hostage while raiding their bikes in Colombia.
2. How did Henry find out about the cupboards?
2a. Plaster was falling from a turning knob above him.
3. What was explained from Orion and the Great Bear’s conversation?
3a. There are secret cities, forgotten doors, and other magical things. Henry’s parents know about them, but haven’t told him.
4. What is Quantum according to Henry’s father?
4a. It is when things can be where they aren’t or two places at once.
5. Why doesn’t Henry want to go back to Boston?
5a. His parents do not allow Henry do anything that could be dangerous or unhealthy.

6. What did Henry find out about the cupboards?
6a. They connected his room to different worlds.
7. What did Frank and Dotty’s conversation mean?
7a. Henry’s parents aren’t his birth parents, and they have a secret.
8. What happened when Henrietta opened the Endor cupboard?
8a. An arm grabbed Henrietta and Henry, and Henry had to cut it in order to get free, cutting himself in the process.
9. What did Grandfather write about in his journal?
9a. Grandfather wrote about how the cupboards worked, traveling through them, and the other worlds.
10. What did Henry discover about himself that was written in the journal?
10a. He came into their world through a small cupboard.

11. How does Henrietta disappear?
11a. She follows a strange old man named Eli into the cupboard.
12. What does Dotty explain to the girls?
12a. Frank was sent to follow Grandfather from a different world, and got stuck in “this” world since Grandfather blocked the cupboards.
13. Who is the woman that appeared in the house?
13a. She is Nimiane, Endor’s queen. She is the one who grabbed Henry and Henrietta through the small cupboard.
14. What happened to the woman after the family defeated her?
14a. They put her in another world by going through the cupboard.
15. What did Henrietta find in the cupboard with the compass dials on it?
15a. It was a raggant, a rhino-like animal with wings. It was what cracked that plaster which caused Henry to find the cupboards.