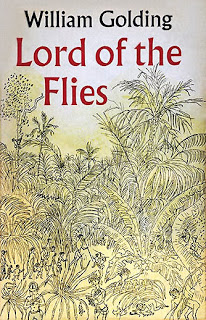 After plane full of British schoolboys is shot down onto an island, Ralph summons the boys and calls a meeting, in which the boys vote Ralph as the chief. Jack Merridew wants be leader as well, which sets Ralph and him into conflict. Ralph attempts to signal boats to rescue them by setting up a fire on the island. However, Jack is in charge of keeping the fire going. Jack leaves the fire to burn out while he and his hunters go off to hunt pigs. Once they come back, Ralph chastises Jack about letting the fire go out, and Jack is submissive, but his view of Ralph quickly changes. SamnEric keep watch over the fire and find a dead parachuter, which they think is the Beast. After Ralph, Jack and Roger go up the mountain to investigate what SamnEric think is the Beast, Jack begins to loathe Ralph because he insulted Jack’s hunters. Jack attempts to have the children vote Ralph down as chieftain but fails and runs away. Eventually most of the older boys run away to rejoin Jack and become his tribe. Jack and his tribe kill a sow and stick its head on a stick as a sacrifice to the beast. Simon hallucinates once he sees the head, and realizes that the Beast is a part of the boys, making them do horrible things. After this revelation, Ralph and his companions clash against Jack and his tribe of savages, ending in disaster


In the beginning of the book, Ralph wants Jack to be his friend and tries to at least give him a share of the power, which was amusing to read about. However, Jack became a nuisance to me in the middle of the book, in which he begins to loathe Ralph because of his desire for power, and all he talked about was pig. Like the mild sadist I am, I enjoyed reading about the killing of the sow, and most of the gore and action. But this happened in the end of the book, and besides that, there was basically no action whatsoever in the book. Most of the book is just interactions between the characters and them dealing with their problems. Chapters like these are hard to read and labor intensive. The book is an attempt to trace the defects of human society, which I think it is very efficient at doing because I got everything that was intended. This book has little amounts of gore and mild themes, therefore it should be recommended for high-schoolers or middle-schoolers with high literary capacity. I would rate this book eight out of ten stars because some chapters were tedious.