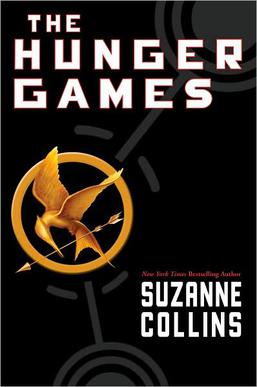 THE STORY:
Katniss Everdeen is a girl who lives in District Twelve in America in the future.  The story starts off the night before the reaping for the Hunger Games.  It is her sister Primrose's first reaping and she seeks comfort from Katniss.  Katniss reassures her, and tells her she probably won't get chosen.  The next morning, everyone gathers for the choosing.  By chance, Primrose is chosen.  Katniss quickly volunteers in place of her sister, and the other person is Peeta, the bread boy.  Both of them receive training from a former victor named Haymitch.  He tells them to pretend to be star crossed lovers to get more sponsors.  They receive training and tests for strength.  After an interview, Katniss becomes known as the “Girl On Fire”.  A little while later, the Seventy-fourth Hunger Games begin.  Katniss sees a boy getting killed almost instantly.  She runs for the weapons, and then she runs into the woods.  She discovers that Peeta has teamed up with some of the other tributes.  Katniss also meets up with one of the first obstacles the Capital has set up, which is a poisonous fog.  Along the way, she becomes friends/allies with a girl named Rue from District Eleven, who is later killed.  Katniss mourns her, and then sets out to find Peeta.  After finding him badly injured, she decides to team up with him, and keep pretending to be in love.  They stick together and end up being the last two people alive in the games.

When I first started reading the book, I felt that I should get a more modern feel out of the story, since it is set in a futuristic America.  As I kept reading, I noticed that this book had a lot of teamwork, hope, and strength incorporated into the story.  The little details and flashbacks made it a more enjoyable read. However, if you don’t follow the story along carefully, you may get lost, and not realize where you are in the book.  Also, there are some parts that contain some violence that is more graphic.  This book is probably more suitable for later elementary school students, and middle school students.  Overall, I would give this book an eight out of ten stars.

1. What is the main function of District Twelve?
1a. They specialize in mining and coal.  (pg. 4)
2. What was the place that was there before the Capitol?
2a. It was built on the place formerly known as “The Rockies”. (pg. 45)
3. Why does Katniss not like Peeta much?
3a. She thinks his acts of kindness might have taken root in her heart.

4. Which districts are wealthy and what benefits do they have?
4a. Districts One, Two, and Four, and they get to eat better and get trained.  (pg. 36)
5. When did Katniss and Gale meet?
5a. They met in the forest when they were hunting, and they were about fourteen years old. (pgs.109-112)