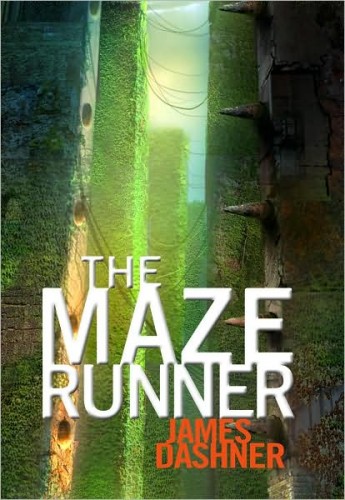 THE STORY:
Thomas, a sixteen-year-old boy, is mysteriously sent by The Creators, the people who created the Maze, to a place called The Glade. As he first arrives into The Glade, he could not remember anything. All of his memories were gone. He could not remember where he came from, how he got to The Glade, nor could he remember his own family or last name. Everyone who lives in The Glade were all sent there for a purpose. A purpose of testing how they handle situations and their ability to work together to solve a problem, also known as The Maze. The Maze is the only known way to exit The Glade and the only way to head back to their ordinary lives. Yet after all these years, no one seems to be able to neither solve The Maze nor come close in finding the exit. The Runners, people who map and run the maze, spends years mapping out the whole entire maze, trying to figure out a way out, yet seize to achieve their goal. As Thomas deepens his knowledge about The Maze, he becomes more intrigue and curious about it. His interest in The Maze leads him into unlocking clues and codes that were unknown and unseen to the other Runners. Throughout the story, he struggles to find the solution to their problem. But in the end his non-stop hard work and perseverance pays off.

MY OPINION:
Before reading The Maze Runner by James Dashner, I had high expectations toward the book after hearing how much others enjoyed the book. As the story began, the vivid descriptions throughout the entire story prevented me from placing the book down. The details were enough to keep me wondering about what was about to happen next. Some questions that occurred to me were remained unanswered till towards the end of the book. Certain points in the story kept me on the edge of the seats, feeling nervous for what was about to come.  But overall, it was an incredible book filled with great details. The­­ book was not extremely hard to follow or understand, so I would recommend it to twelve to sixteen year old. Even if I could go back in time, I still would have picked this book because it is worth your time reading. Overall, I would give this book eight star out of ten.

2. What is the Glade?
2a. The Glade is what they call the place they are trapped at. It’s also the place Thomas is stuck at. The Glade has four different sections, the Garden, Blood House, Homestead, and Deadheads. (page 6, 43)

3. What is one the other side of the wall? ­­­­­­
3a. Outside of the walls is a gigantic maze. The people’s life is all based around the unsolvable maze. The maze is an exit from the glade; it also acts as a wall that protects the people from the grievers.  (Page 38, 26, 45)

4. What are Grievers?
4a. Grievers are also known as “Nasty bugger.” They only come out during the night and occasionally during the day. The walls were built to protect the people from the grievers. Grievers are capable of killing people/the runners.  (Page 39, 46, 115)
5. What does the runners do? What are their responsibilities?
5a. The runners are the people who spends their days running and trying to map out the maze. They spent 2 years trying to figure out a exit from the Glade. (Page 45, 34-35)

MIDDLE SECTION
6. What does the Griever look like?
6a. The Grievers are part animal and part machine. It’s covered in hair, slim, spikes, and has six legs. The Grievers are described as disgusting and frightening creatures.  (Page 126, 134)
7. How did they survive in the Maze overnight?
7a. Thomas and Minho worked together and killed four Grievers by tricking them into falling off the cliff. (Page 126-138, 140, 148)
8. Where did they get the serum to cure the people who got stung by a Griever?
8a. The Creators gives the people at the Glade the serum along with the supplies they need. They send it in the Box every week that is delivered by the elevator. (Page 142)
9. What is Gally’s opinion or thoughts toward Thomas?
9a. Gally doesn’t really like Thomas. He is angry and despises Thomas. He hates the fact that Thomas broke the rule and suspects Thomas is a spy spent from the Creators. He blames Thomas for everything that changed or is out of the ordinary. (Page 146-163, 189)
10. What makes the Maze so difficult to solve?
10a. The Maze is difficult to solve because, the walls move every night. The Maze stretches for miles and miles and has a massive size. The routes changed with the movement every night. The walls move at the same time the doors close. The Maze’s patterns repeats themselves every moths. There is one through eight sections and they stay at the same exact spot. Only the routes changes the location of the sections stay the same.

LAST SECTION
11. Is there some sort of code to the maze in solving it?
11a. Through flashes of previous memories Teresa remembers that the Maze is a code. Meaning, there were special codes to help the people figure out how to solve the maze. The letter code was revealed as Float cat, Catch, Float.  (Pages 270, 278)
12. What is Thomas’s theory on solving the maze?
12a. He thinks the movement of the wall had nothing to do with the maze or the map. He thinks the walls would spell out some sort of words or codes that might helps them escape from the Glade and back to their original lives. (Page 273)
13.How did Thomas figure out the “code” for the maze? Or test his theory.
13a. They traced the pattern of each section of the maze from the last ten or so days onto a piece of wax. They then slacked all the section’s patterns from the last ten days on top of each other. They made piles along the table, in order from section one through section eight. They then took the top page from each pile and made sure it was all from the same day. Thomas then stacked each section’s paper on top of each other, and then tried to find a “code”. In the exact center, he saw the letter F, then an L, then an O, then an A, and then a T. Then C, A, and T. Each section had a different letter in the center. (page 274-279)
14. Why did Thomas want to get stung by Grievers?
14a. Thomas wanted to get stung because he wanted to get his memories. They needed more clues about the code. He wanted to get his memories back because he thought there might be a clue in his memories on how to solve of escape the maze. Go through the changing phase on purpose. (Page 291, 294-297)
15. What is the purpose of the Maze?
15a. The Creators are eliminating them out, seeing who gives up and who doesn’t, figuring out who is the best. They are watching their every move, analyzing each and everyone of them. The Creators are throwing variables at the people trying to get them to give up and find their breaking point. They are testing their ability to hope and fight. It’s a little bit similar to a experiment. Everyone at the Glade was taken when they were really young. The Creators somehow figured out that they have above-average intelligence and that’s why they are trapped in the Glade. They are seeing who survives it all and who doesn’t. The Creators are throwing something called the “Variable” at them, which is a problem that doesn’t have a solution. Seeing what they would do, and if they can work together to solve the problem also known as the maze. (Page 301-304)