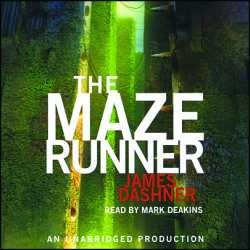 The book begins with a boy named Thomas arriving to a place called the glade through an elevator without any memory. He is filled with confusion and questions, yet receives no answers. He meets the leader, Alby, and his assistant Newt, Chuck his guide, and Gally an enemy. Thomas learns about the maze that is everchanging, and decides that night he wants to be a runner and run through the maze. On the second day, Alby begins the tour for Thomas and shortly after it has begun, an alarm went off signifying the arrival of a newbie. The newbie turns out to be a girl who brings the alarming message that she would be the last newcomer to the glade ever. One day Minho and Alby go into the maze to observe a dead griever, the creature they all live in fear of. However, they don’t make it back in time. Without thinking, Thomas went into the maze joining Minho and half dead Alby. A griever, the creature all gladers live in fear of chases Thomas and luckily Minho and Thomas escape by sunrise. Half of the people praise him, while the other half hate him. He is chosen to become a runner. In the meanwhile, he also finds himself telepathically communicating with the girl, knowing they share a connection. One day the girl says that she triggered “the ending”, and the people of the glade notice that the sun went missing, and the maze doors that protect them by closing no longer close. Thomas forces himself to go through a process that allows him to tap into his memories. Through this, he learns how to escape the maze. One night they all gather to do so. Half of them make it to jump off a cliff into a griever hole. There is then a computer there to kill the maze. They kill the maze.

MY OPINION:
The strengths of the book were that it had a storyline that would kept you wondering what would come next. However, the downside was that in order to keep the reader lingering, the writer tended to ramble. A certain topic would be discussed in such major detail, that the writing tended to trail of a bit. The vocabulary had some great vocabulary, unfortunately the best vocabulary was sprawled throughout the book. Therefore, good vocabulary was a little more difficult to scavenge out, yet when there was good vocabulary, it was extremely juicy vocabulary. I would recommend this book to readers grades seven through nine. The story line is complex and takes a bit of a higher reading for a younger student. However, I think that an average level reader in grades seven to nine should find this book to be a reasonable challenge, without being overly perplexing. I would rate this book an eight out of ten.

1. Why did Chuck feel the need to make a connection towards Thomas?
1a. Reflecting upon the limited information spoken of regarding Chuck, he has only been in the Glade for a month of so. He is probably lonely like Thomas is, and can easily recall the mindset of first arriving, as he only arrived not very long ago.

2. Why does Gally feel an immediate wrath towards Thomas?
2a. He recognizes Thomas, and feels that Thomas is up to no good for arriving.

3. Why do you think Alby has authority over the other’s in the glade?
3a. I believe that Alby can be inferred as considerably older than many of the other’s in the glade. There is also a chance that he has been in the glade the longest.
4. What do you think makes Thomas suddenly want to become a runner?
4a. I think after learning about the maze, he is especially curious about it and wonders what makes it as difficult as it is discussed.
5. At this point, what can you infer about Newt and Alby?
5a. Newt seems rather laid back, he is likely to feel more comfortable in the glade. He has probably been there for a lot more time than many others. Additionally, he has friendly approach towards Thomas. Alby is very commanding, and is for sure represented as a leader amongst the community. I believe that Alby knows something the others do not, and is in fear of it.

6. What came in to the box after Thomas’ arrival?
6a. A girl appearing dead came alive and carried a not claiming she would be the last arrival through the box.
7.What happened that night Thomas went exploring?
7a.While exploring, Ben, the sick boy came and attempted to kill Thomas. Alby came and told Alby not to continue attacking, yet he refused. So Alby shot him in the head, barely missing his brain.
8. What was Ben’s consequence?
8a.He was banished. This meant that he was released into the maze to the grievers. He wore a leather collar which was attached to a pole and held onto by the keepers. Then he was released.
9.Why does Thomas feel guilty?
9a. Thomas feels guilty because the puzzling, and quite haunting events all seemed to come right after Thomas. Many in the glade feel that Thomas is linked to these phenomenons and has caused them. The accusations, even though not necessarily true, make him feel culpable.
10. What puzzling events occurred after Thomas’ arrival?
10a. A peculiar girl shows up in the box with a concerning message, Ben attempts to kill Thomas and is banished, they find a dead griever, Thomas ends up in the maze for a night, Alby is tied up.

11. Why do you think Alby suddenly changes in personality?
11a. I think that when he went through the changing and experienced some memories that caused him realization. He realised things that make him suddenly in fear.
12. How did the changing affect Thomas?
12a. He figured out how to escape the maze as well as clarified many confusing events.
13. How has Teresa and Thomas’ telepathy benefitted them?
13a. They are able to communicate ideas and thoughts that may take longer for other gladers to accept with one another. It also signifies that they had a relationship in the past.
14. Why did Thomas request for the wax paper and maps?
14a. He asked for the wax paper and maps because Teresa mentioned the maze being a code. He decided that he could decode the code and find a way to save the gladers.
15. Why do you think Alby sacrificed himself to the grievers?
15a. After the changing occurred, Alby lived in fear. He knew something that the others did not. Therefore, whatever he feared, he would rather escaped by death than to face in the future.