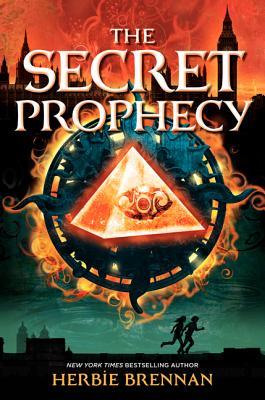 Em Goverton, a modern day boy from England wakes up one day to find his father, a prominent college professor dead. Before his death, Em’s father had been obsessed with Nostradamus. Professor Goverton spent almost all his free time researching Nostradamus, the famous sixteenth century French seer. Overwhelmed with grief, Em blindly goes through his father’s papers after his funeral, and finds a set of cryptic clues leading to the secret prophecy of Nostradamus. Enthralled, Em and his friend Charlotte follow the clues, meeting Victor, a homeless man along the way. Mysterious events begin to happen to the unlikely trio, and Em starts to suspect people are not who they say they are. It soon becomes apparent that he is caught in the middle of the power struggle between the secretive Section 7 and the ruthless Knights of Themis. As the truth becomes more clear, Em cannot decide who is friend or who is foe. Em finds out that he must either sacrifice his father or sacrifice his friends, but cannot determine who to give up because he is emotionally attached to both. In the end, Em grows up and learns to make decisions based on the possible outcomes and not on his emotions. He also learns to never look back, and promises himself to never be involved in such events again at the end of the story.

At first glance, this book was very appealing. However, when I began to read it, I realized it was meant for younger students. The author used vocabulary more suited for sixth graders, as I struggled to find words to use for my vocabulary list. Content wise, the story was agreeable. I liked the way each character’s backstory was slowly revealed. The author used some foreshadowing to give the reader hints, for example, hinting who the real leader of the Knights of Themis was. Even though there was a great deal of foreshadowing, the author was not too obvious about it. The reader has to dig deep and read between the lines sometimes to make the connections. Herbie Brennan also placed the plot twists strategically. I knew something was coming, but I didn’t know exactly when, and it always caught me by surprise. Overall, I would rate this book seven out of ten stars. This book should be for older elementary school students and younger middle school students.

8. Who is Victor, and where did he lead Em to?
8a. Victor is a secret agent for Section 7. He lead Em to one of his safe houses to hide from the Knights of Themis.

LAST SECTION
11. Why did Em travel to America?
11a. Em traveled to America because he had to rescue his friend Charlotte who had been kidnapped.

14. What did Em’s father tell Em after he was caught?
14a. Em’s father told Em that the Knights of Themis were not actually going to use a rigged vaccine to take over the world, and that Section 7 is the real bad guy.