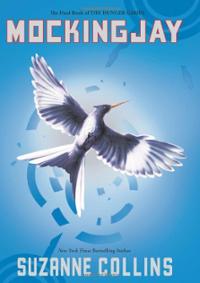 Katniss Everdeen survived the Quarter Quell, but Peeta has been captured by the Capitol.  She discovers that there is a rebellion and that she is an essential part of it because she is the Mockingjay. Katniss learns that District 12 does not exist and she finds her way to District 13, where all of the survivors of District 12 have gone. After a series of events, Katniss agrees to be the Mockingjay and has many conditions. The rebels film a series of propos containing Katniss with the intention of unifying the districts. Peeta is brought back by the rebels, but displays abnormal behavior, due to torture. Burdened by grief, Katniss takes a trip to District 2, hoping to include them in the rebellion. At Two, Gale plans to explode the Nut, the mining center of District 2. Katniss is shot in the process and meets Johanna Mason. Since Katniss and Johanna do not have sufficient training to go to the Capitol, they train together and take a test that determines whether they would be able to go to war. Katniss passes the test but, Johanna is held back due to her trauma. When Katniss is in the Capitol, Peeta is sent to her squad by Coin, president of District 13, with the intention of killing Katniss. While in the Capitol, Katniss is caught with the responsibility of trying to stay alive. Many deaths occur, but it does not interfere with Katniss’ determination and ability to stay strong.

This book was an interesting book, comparing it to the first two books of The Hunger Games trilogy, but it was also very confusing. It was hard to understand what was happening in some parts of the book. The book was also very slow-moving. It did not have enough action to keep the story moving. A strength in this book was that it provided a more deeper explanation of the main character, Katniss. Since the author also included some events that occurred in the previous books, it had a good explanation of Katniss’ life. The author also displayed a good word choice. If I were to go back in time, I would choose this book again because of how well the first two books in the trilogy were written. I would recommend this book to a thirteen to fifteen age group because of the book’s language and complexity. Overall, I would rate this book eight out of ten stars.

1. Why does Katniss feel angry when President Snow sends her a rose?

1a. Katniss thinks that by sending her a rose Snow is giving her a message that he is watching her. She gets infuriated because she is reminded that the Capitol is still in control. (15)

2.Why would the main character, Katniss, agree to be the Mockingjay?

2a. When Peeta, who is currently being tortured by the Capitol, calls for a cease-fire, Katniss becomes angry and perplexed because she does not want the Capitol to dominate her life, but she still wants to keep Peeta safe. By being the Mockingjay, Katniss believes that she is doing both. (30-31)

3.How does Katniss feel about her sister, Prim.

3a. Katniss feels duty and protection toward her sister, Prim. Her actions throughout the Hunger Games trilogy show Katniss trying to protect her mother and Prim.(32-34)

4. How is Katniss’ relation with President Coin?

4a. Katniss feels Coin is threatening and deceitful. Coin is using Katniss as a pawn for her own gain. She might “discard” Katniss after use. (50)

5. Why does Katniss hate District 13 despite, what it has provided for District 12?

5a. Katniss hates District 13 because, even though it has provided for District 12, it cannot be trusted. During the dark days, District 13 had agreed to stop the war if the Capitol left them alone and let them play dead. Katniss feels that by doing so, District 13 abandoned all of the other Districts and left them defenseless despite owning the best militia and weapons. (80-81)

6. Throughout the first and second books of the Hunger Games trilogy, Prim was shown as a soft, sensitive and defenseless girl. Based on the two books, how has Prim changed in the third book because of their circumstances?

6a. The reason Katniss volunteered for Prim at the reaping in the first book was because Katniss knew Prim wouldn’t make it and it was Katniss’ duty, as an older sister, to take her place. Now, as Katniss is slipping into depression and sadness in District 13, Prim helps her sister by solving her problems. In a way, Prim has matured more than Katniss, based on their experience, and has a better understanding of the Capitol than Katniss.(151)

7. What was the Capitol’s intention by bombing 13?

7a.  The Capitol wants to keep Katniss under control. They hope to acquire District 13 and the bombing is only a message for them to stop rebel action. The Capitol does not want to destroy District 13.(152-153)

8. Why would Katniss stop Gale from exploding the “Nut”? What does she feel about the people inside the “Nut”?

8a. Katniss is hesitant of bombing the Nut, a mining mountain, because it reminds her of the mining accident back in District 12. Katniss knows that there are rebel spies inside the Nut and she does not wish to sacrifice them. (204-205)

9. Why does the injured man hesitate to shoot the Mockingjay?

9a. The injured man decides to look at Katniss’ point of view. Even though he does not say, it is implied that he agrees that the Capitol is controlling the districts and understands that Katniss is not the one to blame. (214-216)

10. Panem et Circenses translates into Bread and Circuses. How does that relate with the Capitol and the districts?

11. Why would Johanna Mason and Katniss want to go to war?

11a. Johanna and Katniss feel rage toward the Capitol. They feel that if they do not go to the actual war, they will miss seeing the destruction of the Capitol and the assassination of Snow. (233-236)

12. Why does Johanna Mason feel pain when it starts to rain during training?

12a. Johanna was tortured in the Capitol by being electrocuted in the water. She probably remembers the incident and is in trauma because of water. (237, 253)

13. How does Katniss feel when she sees the Capitol laced with pods.

13a.  Katniss Everdeen is a Hunger Games victor. When she sees the Capitol laced with pods, she is reminded of the arena and realizes that she is still in the Hunger Games. (251)

14. When Boggs passes away, how does Katniss’ role in the war change?

14a.  Katniss takes control of Squad 451. She leads them on an unauthorized mission to assassinate Snow, but when dear lives are lost she regrets her decision. (276- 314)

15. How does Katniss feel when Gale “killed” her sister?

15a. Katniss wanted to forgive Gale, but she feels betrayed by him. Their friendship falls apart when Gale does not shoot Katniss when she is captured by the rebels.(366-367)