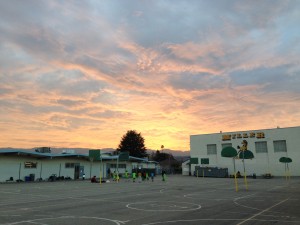 View from the blacktop, sunset, January 2015.

I used to work at a school where each student needed an electronic portfolio.  The teachers came together to design an idea that would make sense.  Sure, we could organize it by subject area or grade level, but it made more sense to organize it by “change.”  Every student titled his/her portfolio “Me, Changing.”  Students wrote about their experiences and included some artifacts, but not all the “changes” had to be related to classes.  Many of the entries were related to big tests that went well or didn’t, but some of the entries were related to family and all the “life” that happens at this age (middle school).  Sometimes, the biggest changes are related to new family members, losing a friend, getting a new bicycle, or passing a major challenge in one’s martial arts class. Without a doubt, change happens, but what do you do about it?

I once heard a story about a person swimming in river.  The river was flowing along with some speed, and all of a sudden, he sees a rock coming downstream.  He started to swim with all his might against the current, but the flow was too strong and carried him into the rock.  Bruised, he managed to survive, but a few moments later, he spied another rock.  Again, he fought to go against the current but lost the battle again.  After hitting the second rock, he was exhausted and could hardly make an attempt when a third rock came into view.  This time, he let the river have him, and he relaxed.  Something unexpected happened.  When he succumbed to the will of the river, the current carried him around the rock without a bruising.

Although it is an analogy, I often think of this story when I encounter a situation in my life that requires me to change.  I take a moment to reflect (Me, Changing) and wonder, “What can I learn in this moment? What is this moment supposed to be teaching me?”  It isn’t always easy to let the current of change take over, but sometimes, when we do, the outcome is remarkable.