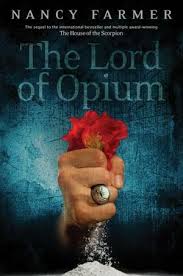 THE STORY:
The main character of The Lord of Opium, Matteo Alacran’s clone, returns from his hiding place in Aztlan after three months of pretending to be an orphan to work in a shrimp factory because the original Matteo Alacran, a powerful drug lord known as El Patron, owns him and needs his heart to prolong his life. After he comes back, he finds out that every relative of El Patron has died because of drinking poisoned wine at the funeral for El Patron. Then he is officially recognized as the leader of the country called Opium. Afterwards, he meets the head of the Farm Patrol, Cienfuegos, and El Patron’s old servant, Mirasol. He establishes Cienfuegos as his personal bodyguard and Mirasol as his “pet.” The only doctor left, Dr. Rivas, advises him to hire more staff to get a working hospital team. Matt does it and commands Dr. Rivas to train the staff. Cienfuegos tells Matt that Dr. Rivas has many secrets. This leads to Matt exploring Dr. Rivas’s surroundings. Afterwards, he meets the Mushroom Master and Listen, a smart black girl. Cienfuegos finds the Mushroom Master there and takes him out of the biosphere. Then he holds a big party for his friends Chacho, Ton-ton, and Fidelito when they visit. The Mushroom Master and Ton-ton conclude that to free all the eejits, Matt must destroy the Scorpion Star, a giant space system biosphere that provides the energy for controlling the eejits. As Matt plans with Cienfuegos to destroy some of the secrets Dr. Rivas has and the Scorpion Star, somehow the security system El Patron built to make the border of Opium impassable is turned off, and Glass Eye Dabengwa, Matt’s worst enemy, tries to take control of Opium and captures Matt. (292)

The book was fast-paced and always had me wanting to read the next page. Mysterious characters and surprises pop up throughout the book. Matt in the beginning of the story was already a developed character because he is the most important character in the story. Matt changes to become more wise and starts to develop the mind of a drug lord to protect himself from Glass Eye Dabengwa. Cienfuegos starts out as a partially developed character and develops a fatherly personality to replace the personality of Tam Lin, Matt’s foster father, who died at El Patron’s funeral. The Mushroom Master is an undeveloped character at the beginning of the story, but he develops a teacherly personality throughout the book. Cienfuegos becomes a very protective person, always trying to follow Matt wherever he goes, even at the possible cost of his life. This book is best suited for ages 12+ because of the difficult vocabulary and mature topics. I would rate this book ten out of ten. (166)

1a. Yes, because the UN reclassified Matt status as a human, not a clone. (9)

2. How many bodyguards does Matt have left after El Patron’s funeral?

2a. Only Daft Donald, Tam Lin’s best friend, is left because Tam Lin warned him about the wine that El Patron poisoned. (24)

3. Does Matt throw the soup at Major Beltrán?

4. Does Matt succeed in opening the holoport with the scanner for the first time when talking with Esperanza?

5. Does Matt recover from scarlet fever?

5a. He does, and he risks his life by opening the holoport again to talk to his girlfriend, Maria, about how to travel to Opium without Esperanza finding out. (117)

6a. He keeps another clone of El Patron hidden in a nursery protected by bodyguards. (139)

7. Who else is in the nursery that was used as a bribery tactic to prevent Glass Eye Dabengwa from attacking Opium?

8. What does Maria send to her boyfriend, Matt, through the portal?

9. What does Matt and Cienfuegos see first when they enter the biosphere?

9a. They see a frogherd who doesn’t know anything about the outside world. (187)

10. What does Sor Artemesia say to Matt to prevent him from becoming more and more like El Patron?

10a. She tells him that he was mortal and also warns him about the tremendous temptation that is set out in front of him because he can have whatever he wants. (227)

11. Does Mirasol survive after having gone rogue?

11a. No she doesn’t, because the infusers used to prolong her life eventually killed her. (286)

12. Does Maria succeed in travelling to Opium without her mother finding out?

13. Does Matt, after he goes to the holoport room, succeed in destroying Dabengwa?

13a. Matt does not succeed in destroying Dabengwa because he isn’t skilled in fighting. (344)

14. Who is the “eejit” who helps Happy Man Hikwa escape from Opium’s protectors?

15. What does Matt do at the end of the book that shows his maturity?