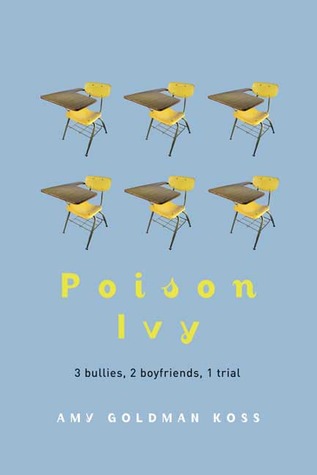 THE STORY:
A girl named Ivy goes on trial against her three bullies, Ann, Benita, and Sophia who are known as The Evil Three. This trial is held in class and Ivy’s classmates know everything about it, but still make Ivy suffer for doing nothing. She talks to her teacher about how she is getting bullied and her teacher, Ms. Gold feels the need to have a trial on this. She believes a mock trial is perfect to educate the students about the legal system and solve Ivy’s problem. There are eight first-person narrators showing what they feel about the case during different times. Ivy is the main character and victim who does not want anything to do with the problem but just wanted to share it with her teacher to get it out of her system. Ann is the boss of The Evil Three who starts this mess. Marco is the only student who understands the entire case and is involved throughout. Daria is Ivy’s lawyer who is very shy and surely cannot fight against anyone to have Ivy gain victory. Bryce is the asinine court reporter who knows the truth behind the entire issue but does nothing. Cameron is the bored guy in the back of the room who sleeps through the case, but makes a big difference at the end. Wayne is the “smarty-pants” about law and Faith is the only witness for the prosecution. What does she do or what does she say? Find out….

When starting this book, I understood it was about a school situation and throughout the book, I could relate to events such as getting teamed up on. It was depressing because through each word, I could remember being in the main character’s position and how difficult it was deal with the issue. At one point in the story I asked myself the question: Was it a good thing that Ms. Gold made them have this trial? My answer: It was a great thing that happened so people are aware of what happens at school and how they can deal with it if this ever occurs in the future. I think the book was a bit confusing and had a disappointing ending. The author used great metaphors and similes throughout the book. I felt that it was a different format of writing. Having eight first-person narrators and showing what they felt at each point was nice. I liked how you could see each person and their thoughts being different while being in the same room and knowing the situation. I would recommend this book to kids in middle school. Overall, I would give this book an eight out of ten stars.

1.Who is the main character and what is her nickname? What are her thoughts on that name?
1a.The main character’s name is Ivy, but people refer to her as “Poison Ivy”. The Evil Three have been bullying her since fourth grade now and have been calling her that. When Ivy now thinks about her name, she also feels like Ivy is too short of a name showing that she has given into her bullies name for her. (pg. 7)

2. Who are The Evil Three and what do they have against Ivy?
2a. The Evil Three are Ann, Benita, and Sophia. They really do not have anything against her, but like to pick on her because they know she does not have the courage to stand up to them. (pg. 10)

3. Why is Bryce’s statement important to judge the people at Ivy’s school?
3a. Bryce states that it is obvious that The Evil Three constantly pick on Ivy. He said that everyone knew that, but did anyone help Ivy out and stand up for her? No, this shows the type of society people live in. Not even one person stood up for her. (pg. 35)

4. What is Ann doing to Marco and why?
4a. Ann is trying to flirt with Marco and act like she is all interested in him to be on his good side so if he becomes a juror, he would be on her side and defend her. (pg. 46-48)

5. Does Marco fall for Ann’s tricks?
5a. No he does not because he knows Ann is a total jerk and that she is just using him for her own benefit. (pg. 54)

MIDDLE SECTION
6. What is Wayne’s title at school? What is he known for/ to do?
6a. People say he is over the top. He is the editor of the school paper and is always trying to stick real new and political issues in between the announcements of school events. People do not want to end up admiring Wayne for everything he is trying to do for the school. (pg. 67)

7. Who is “Einstein” and why is she so sad
7a. “Einstein’s actual name is Daria. She is Ivy’s lawyer and she is sad to be because she does not like law and does not want to deal with all of this drama. People call her “Einstein” because of how smart she is. She also finds out people are talking bad about her on MySpace. (pg. 14-17 and pg. 68)

8. What did it say on Jennifer’s MySpace about Daria?
8a. It talked about the trial the class was in and the people that were working on solving the case. It said

“Owen with drama and passion
takes side with the popular sluts,
Defending their right to be bitchy without any ifs and butts.”
“While Einstein who is frigid and brittle,
as cold and as dr as a stick,
Locks arms with the loathed Poison Ivy
who makes all the rest of us stick.”     (pg .69)

9. What does Ms.Gold make the class do and why? Was it even a good thing to do? What does Ivy feel about it after they start?
9a. Ms. Gold wanted the class to do a mock trial because they were studying the judicial system. Their trial was based on a real event that happened to the main character, Ivy. Three popular girls bully her and that is basically their case-to figure out if the three girls actually bullied her. Ivy feels like her teacher is going to lose her job because of her and is going to start begging in front of a store soon since her class isn’t doing so well. (pg. 3 and pg. 82)

10. How does Bryce signal to start the case court?
10a. Bryce is the Court Reporter and is a very asinine boy. He says “Dude! Let the wild rumpus begin!” to start the court case.

LAST SECTION
11. How could we tell Daria was actually very scared and tensed up before the trial resumed?
11a. She is known as “Einstein” because of her crazy amount of brain power and usually she can just run her fingers down the spine of a novel, and that used to calm her down. Now she is reading the same paragraph of a book again and again but still can not even understand what she is reading. We can infer something is wrong. (pg. 111)

12. What is Faith’s reaction when getting the letter to become the new lawyer?
12a. She looks shocked and you can see her back dissolve like cereal in milk. (pg. 114)

13. Towards the end of the story, what are Marco’s feelings about the case?
13a. He thinks its stupid to do this entire case for “a stinking apology”. (pg. 117)

14. How do we know Ann is fake, mean, and maybe even be a bully?
14a. When Ann finds out, Sophie is leaving the school, she is very happy. Apparently, they were best friends, but after the trial Ann doesn’t even seem to care about what Sophie is doing with her life. (pg.130)…. Also, even when Ann is in so much trouble and she has been accused of bullying, she is still worried about what to wear to picture day. (pg. 141)

15. What is the final decision in the court?
15a. Benita never bullied Ivy meaning that she never tripped, kicked, shot, hit, bit, ot stabbed her. She also never threatened Ivy about anything. Sophie might have said some “not so nice” things, but there is no witness or evidence to say she actually did. Ann actually ended up winning the case even though everyone knew she did bully Ivy.