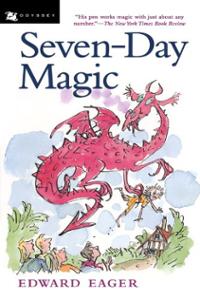 Seven-Day Magic depicts of five friends that cross paths with a magical book from the library. The librarian explains that the book must be returned after seven days. At first, Susan, John, Abbie, Fredricka, and Barnaby sense no abnormalities with the book. However, as they begin to read it, they discover that the book is about none other than the five children themselves. Diving deeper into the many capabilities of the magic book, they uncover the future adventures that the book can mold. Obeying the children’s every command to an extent of danger, the book acts as a genie that follows the base of a wish while adding gruesome details. Fredricka experiences the book’s guidelines firsthand when she wished for a grand magical adventure. Instead of a merry enchanted world, a dragon kidnaps her and plans to eat her as a snack. As the five children are warned of the dangers of the book, they learn to save Fredricka and start to change their carefree attitude towards handling the magic novel. They continue to explore the outcomes of wishing on the book, both positive and negative. The children pursue their adventures by interacting with an unfinished story’s character and learning their grandmother’s history and memories. Despite their amazing adventures, conflict between the characters increase as the return date nears. The enchanted pages of literature test the childrens’ trust and toy with their emotions and lives, increasing the possibilities that will be selected to make the ending.

Edward Eager’s novel, Seven-Day Magic, first attracted my curiosity when it suggested the idea that something like a magical book exists. However, as I flipped each page, I realized I was agitated by its failure to include suspense and excitement. Instead of slowly building a lead up to drag me into the story, the novel simply spewed out facts of the story. The characters were not as interesting as I thought they would be, as I did not feel as though I connected with them at dramatic moments. The story was very interesting, although I would have prefered a different way of narrating the tale to the reader. Overall, the elegant story and simple narration made me recommend this to younger middle school students. I believe Seven-Day Magic deserves a rating of six out of ten stars. Sadly, if I were able to, I would like to choose a different book.

1. Who are the main characters of the story?
1a. The story follows five children named John, Susan, Barnaby, Fredricka, and Abby. (2)

2. What peculiar event is taking place and what is causing it?
2a. When Susan rents out a mysterious red book from the library, its contents consist of the exact words that the children stated. (14)

3. Where did the dragon come from?
3a. As Oswaldo rehearsed his magic skills, he unintentionally pulled out a dragon from his magic hat. (26)
4. How did the children defeat the dragon that had captured Fredricka?
4a. Instead of battling with blood and violence, the children used the book for ideas to lower the dragon’s confidence. (47)
5. How was Susan’s wish different from Fredericka’s?
5a. While Fredericka wished to seek out magic, Susan wanted the magic to come to her by surprise. (59)

MIDDLE SECTION
6. Who did the children meet and what was his/her name after Susan made a wish?
6a. After Susan’s wish, the children met a small infant named Baby and a little girl whose name was
not stated. (62)
7. Why do you think the baby feel vengeance towards the little girl?
7a. I think Baby felt angry because he was not aware of the little girl’s assistance when she steered him away from danger and instead viewed it as a restraint from his freedom to explore his surroundings. (71)
8. How do the remarks of the passengers of the train support the personality of Baby?
8a. Baby’s character description is supported by the train riders’ complaints, explaining his childish and selfish attitude. (76)
9. Why was Grannie angry at Barnaby?
9a. When Barnaby stole the school’s handbell, Grannie considered it as stealing school property. (110)
10. Why was Susan and John surprised when Carl Ingoldsby appeared?|
10a. Watching Grannie meet Carl Ingoldsby was surprising because he was Susan and John’s grandfather that they never got to meet. (111)

LAST SECTION
11. How was Abbie’s wish different from Grannie’s?
11a. Grannie wishing caused the children to view the past, while Abbie’s caused them to view the present. (124)
12. Why was the director mad at Abbie’s father?
12a. The director was scolding Abbie’s father for singing at the wrong time and bringing his kids, who meddled with the show as well. (136)
13. Why did Barnaby wish to be a strong knight?
13a. Because Barnaby was a scrawny short boy who was always bullied, he leaped at the chance to be a strong heroic knight. (172)
14. Why were the children hesitant to return the magic book?
14a. When the children finally learned to tame and take advantage of the book’s magic, they no longer had a reason to fear its dangerous magic. (183)
15. Why do you think Miss Dowitcher gave the children a strange look they returned the magic book?
15a. Miss Dowitcher’s strange glance signaled that she assumed the children would not survive the book’s dangerous magic.