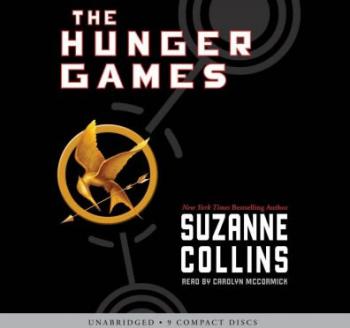 Katniss Everdeen is a sixteen year old girl who lives in Panem, which is under the rule of a cruel government called The Capitol.  There are twelve different districts in Panem that are controlled by The Capital, and Katniss lives in District twelve along with her sister, Prim, and her mother.  Katniss’ father died when she was eleven from a mine explosion, so her family depends on her to survive.  Every year, The Capitol holds a reaping, where two people, one male and one female, from each district are chosen to fight to the death in the annual Hunger Games until there is one person left standing in the end.  At the reaping, Prim is chosen as the female tribute, but Katniss knew that if Prim participated in the games she would get killed, so Katniss volunteers as tribute.  Once Katniss went on the stage, Peeta Mellark is chosen as the male tribute.  As the seventy-fourth annual Hunger Games go on, Peeta and Katniss became closer and closer to eachother.  Luckily, Seneca Crane, the head gamemaker, decides that two tributes from the same district can be victorious in the Hunger Games, so Katniss and Peeta both try to fight through agonizing moments.  Both Peeta and Katniss face life threatening occasions, however, they keep entertaining the Capitol with remarkable behavior throughout the story.

At first, this story was not as interesting as I thought, but as I kept reading, the story became more intense and stimulating.  The details that are used in this story helped me imagine what was happening, which improved my reading experience throughout the story.  These details also made me want to keep reading, unlike the beginning where I wanted to find another book.  This story made me realize how fortunate I am because in this story, people are treated like they are slaves by The Capitol.  The one flaw in this book that I found was the poor vocabulary.  There were a few strong words used, but overall it was not extremely challenging to read.  This book has violence, such as murder or killing so I would not recommend this book to kids who are young in age.  If I could go back in time and choose a book to read, I would definitely pick this book because this was an interesting book and I was able to understand the perspective of a distopian society.  Looking back at this book, I would rate this seven out of ten stars.

2. Which two people are selected in District 12?
2a. Katniss Everdeen and Peeta Mellark are the two tributes.

4. What does Katniss tell her mother to do while she is gone?
4a. Katniss tells her mother to take good care of Prim.
5. What is an Avox?
5a. An Avox is a person who is punished for rebel against the Capital.  They would get their tongues cut off so that they are mute.

MIDDLE SECTION
6. What is injected into Katniss before the games?
6a. A tracking device is injected into Katniss.
7. What is the cornucopia?
7a. The cornucopia is a giant cone filled with weapons and items that could help the tributes survive.
8. What was the major rule change?
8a. They announced that both tributes could live and win.
9. How does Katniss trigger the trap to strike the Careers.
9a. She notices that someone had set bombs as a trap so she shoots an arrow at a bag of apples,
which triggers the trap, and all the supplies explode.
10. What happens to the boy from district 3?
10a. Cato killed him because he thought that he was mad about his supplies exploding.

LAST SECTION
11. What is a feast?
11a. A feast is where the Gamemakers provide the remaining tributes supplies but there is a very little amount so the tributes fight to the death for them.
12. Who saved Katniss during the feast? From who?
12a. Thresh saved Katniss during the feast from Clove.
13. What story does Katniss tell Peeta in the cave?
13a. Katniss tells Peeta how she got a goat for Prim.
14. How does Cato die?
14a. Katniss and Cato were trying to kill each other when a pack of mutation wolves come in.  Katniss pushes Cato into the pack of wolves and Cato gets eaten up.
15. In the end, what does Haymitch tell Katniss to say?
15a. Haymitch tells Katniss to say, that her and Peeta did many things because they were extremely in love.