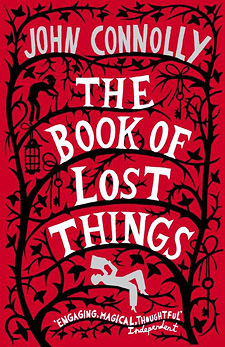 THE STORY:
David is not a very outgoing person. His books are his friends. David’s mother is dying of a disease that is eating away her insides. His worst nightmare is being pulled out of school and being told that his mother has passed and that is what had happened. David’s father soon remarried to a woman named Rose. David’s father and Rose had child named Georgie. David was jealous of Georgie, he thought that his father might love Georgie more than him. Late one night, David hears his mother’s voice, he follows it outside into the woods, before David knows it he has entered a whole different world. He first meets the Woodsman. The Woodsman dies in a fight trying to save David. While in this world, David wonders if his father misses him. David soon finds Roland, a soldier that will help him. Sadly Roland dies in a castle looking for his brother who died in a battle. David finds his way to the kind that is supposed to help him get home. David finds out that the king is Johnathan. Johnathan made a deal with The crooked Man to give up his sister to become king. David is offered the same deal, he declines and kills The Crooked Man and Johnathan. Out of the castle gates awaits the Woodsman.

MY OPINION:
The first few pages of the book were quite simple. As I continued to read, the book got more challenging and mysterious. I think this author had many conflicts happening in the story, it made it a little confusing, but the shocking parts he used made it a great and enjoyable book. The author continued to use good vocabulary words throughout the story, some were a little hard for me. Some I had no clue what they were, so I looked the up. I recommend this book for 7th through 9th graders, The book is not that challenging, there might be a few hard vocabulary words, but it is not that hard overall. If I had a choice to read this book again, I think it I would, The book is so interesting to read, it keeps me at the end of my seat in every chapter. I give this book an 8 out of 10 stars.

1. How did David’s mother die?
1a. She dies from a sickness that ate away at her from the inside. (1)

2. What did David whisper to his mother before she got taken away?
2a. He whispered “Good-bye, Mum.” (7)

MIDDLE SECTION
6.Who got killed by a pack of wolves?
6a. The woodsman got killed by the wolves saving David. (118)
7. Who tried to nod off Snow White?
7a. The six dwarfs tried to nod of Snow White. (127)
8. Who does the huntress kill, then eat for breakfast the next day?
8a. She kills and eats the deer-girl. (156)
9. What was the name of the soldier that helped David find his way to the king?
9a. The soldiers name was Roland. (173)
10. What was the name of the family that gave Roland and David somewhere to eat and sleep for a night?
10a. The name of the family was the Fletcher family. (191)

LAST SECTION
11. What is the choice David had to make?
11a. He could stay with Roland, or tell the Crooked Man his half-brother’s name and get his way home sooner. (230)
12. Why did David roll over one of the knights?
12a. He turned him over just in case he died and to tell anyone of what had happened to him. (244)
13. What did David discover in one of the castles room?
13a. He found Roland dead on a great thorn. (251)
14. What did David find in the king’s castle?
14a. He found Johnathan’s book, Johnathan was the king and he made a deal with the Crooked Man to become king. (279)
15. What did the Crooked Man do to the kids who gave up their siblings name?
15a. The Crooked Man killed the siblings and put them in a jar. (317)