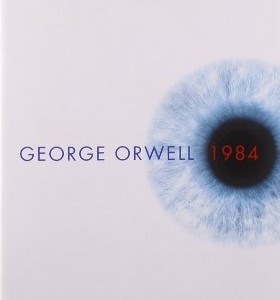 Winston Smith, an average, broken down middle age man with varicose veins and a beer belly, works in the records department in his government. He does no sorting or organizing, but is in fact in charge of rewriting all of the previous records to fit the current news output. One day, during a stress release activity known as the Two Minutes Hate, Winston meets a young girl, Julia, and a member of the Inner Party, O’Brien. Soon, though, he falls in love with Julia and learns about her crude way of defying the Party, which consists of breaking the law while avoiding discovery. Winston, however, decides that they together will go find O’Brien, who seems very suspiciously like a member of the revolting organization, the Brotherhood. Soon after they contact O’Brien, they realize they were not careful enough and are apprehended while committing their nation’s only crime, “thoughtcrime”. After, Winston, through his government funded mental reconditioning overseen by O’Brien, who is actually a dedicated member of the party, learns about how his society is at the peak of totalitarians. His nation handles their rebellious citizens in interesting ways that Winston experiences first-handedly.

MY OPINION:
When I started this book, it was slowly paced and slightly hard to understand. After getting used to the author’s style of writing, I began to understand the text more and more. Though this is a great book that reminds us to look at society and the world around us, it was hard to grasp what the author’s underlying subject was, and some sensitive topics were described in the book. The author’s word choice and tone reflect the time period in which it was written, and with the improvement in the quality of life, it may be extremely hard to picture the things that the author is trying to convey. The writing is more expanded and the plot moves slower than other books, so it may be a hard read for readers of this age group. Overall, I feel that this book is more suited for an older age group. I rate this book nine out of ten stars.

1. Why is Winston discontented with Oceania’s current situation?
1a. Winston dislikes how they observe everyone’s movements and can discern thoughts.
2. Why does Winston feel a connection to O’Brien?
2a. Winston sees that both he and O’Brien are distracted and looking around during the intensive “Two Minutes Hate.”
3. What is the purpose of “Newspeak?”
3a. Newspeak is the developing language that is used to abolish all possibilities of anti-party thought.
4. What are “proles”?
4a. Proles are the lower class of the system set up in the book.
5. What is Winston’s job at the ministry?
5a. Winston corrects records for the government during the day.

6. What were some of the privileges of the Inner Party?
6a. Inner party members had better food and drink, and maybe a servant.
7. What do Winston and Julia go to O’Brien for?
7a. They wish to join the Brotherhood.
8. Why does O’Brien turn off his telescreen?
8a. He turns it off to placate Winston and to get him to talk.
9. Why is it that “WAR IS PEACE?”
9a. War creates the need for the goods to be used and so there is a reason for the people’s suffering.
10. What is “Ingsoc?”
10a. Ingsoc is a religion used by the upper class to brainwash the other classes and remain in power.

11.What is “Big Brother?”
11a. Big Brother is the nonexistent entity that rules Oceania, who is also the image of power given by the upper class to maintain control.
12. According to O’Brien, how is the Party’s way of dealing with rebels different from other countries in history?
12a. The Party not only forces the rebels to admit to their crimes, they also condition them mentally so that they love the Party.
13. What is Room 101?
13a. Room 101 is the room used to torture people mentally into loving their dystopian society.
14. What is the goal of the Party?
14a. The goal of the Party is to maintain it’s power, and gain nothing but more power from it.
15. Why is Winston living the way he is after the Party has dealt with him?
15a. Winston’s mental structure has been broken down by torture and pain so that he no longer can have the will he used to have.