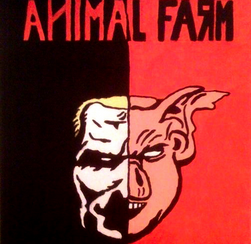 Manor Farm, a farm that lives under harsh control of Mr. Jones, struggles from hunger and fatigue. Old Major, an elderly and respected pig, speaks to the farm and claims that animals are spending a tremendous amount of effort and getting nothing in return. Thus, Animal Farm must hold a Rebellion toward the human beings for their own liberty. A few days later, Old Major passes away and two new leaders are chosen, Snowball and Napoleon, whom are both pigs. One day, Mr. Jones and his men decide not to give the animals food. To their surprise, the animals lash back, causing the Rebellion, as Mr. Jones as his men panic and flees. Snowball and Napoleon renames the farm “Animal Farm” and creates seven commandments to prevent the animals to become “human-like.” As winter approaches, the two leaders begin to contend with one another. Although intellectual Snowball is effective, Napoleon becomes envious of his work. Thus, Napoleon ruins Snowball’s plans and orders his dogs to chase him out of the farm. Since Animal Farm is now under Napoleon’s rule, he demands more work to be done and decreases food rations. Napoleon’s cruel leadership and blood-thirsty tyranny forces animals to labor through fear and slaughtering. The seven commandments were later changed to the advantage of the pigs, allowing pigs to be able to sleep on beds and even wear clothing. Animal farm could become utopia of living in peace and happiness, or it could eventually become ruins.

MY OPINION:
George Orwell depicts a deep meaning behind the story. He contrasted the communism of the Russian Revolution to his novella, Animal Farm. The authors used a strong sense of imagery and literary techniques. Orwell uses allusion very oftenly as he compares characters such as Napoleon the tyrant to Stalin Trotsky of the Russian Revolution. He explains thoroughly the hardships of the animals living under torment and the sorrow they experience. Although the book is very interesting, I do not recommend it to students in middle school or younger, for that they may not understand the concepts behind the story. The story is not very exciting or adventurous  and does not give a pleasant ending. After reading the story, Orwell’s description of the pigs made me begin to dislike pigs for that they were the cause of the disbalance of Animal Farm. Orwell has also provided a variation of vocabulary which made the story more interesting. I would rate this book seven out of ten stars.

3. Why would some rules of the seven commandments related to the relationships of animals and human beings?
3a. That way, the animals won’t adapt and act like humans and they want no contact or similarities to humans because they are cruel.
4. What is Boxer’s motto?
4a. His motto is “I will work harder!” (pg. 29)
5. Why would Snowball want to build the windmill?
5a. Since it required a lot of effort for the animals to work, the windmill can finish their jobs quicker and is more efficient. (pg. 49)

6. Why would Napoleon decide to build the windmill after all?
6a. Napoleon was simply jealous of Snowball’s leadership, so disagreeing to building the windmill was only to be against Snowball, even though he knew that the windmill would save the animals from the extremity of labor. (pg. 57)
7. What was Napoleon’s purpose for beginning trade?
7a. Because Animal Farm lacked necessities such as dog biscuits, irons, nails, and string, trade would allow Animal Farm to obtain them by trading items such as hay and wheat crop. (pg. 63)
8. How and why would Squealer convince the other animals about pigs sleeping in beds? How do they react?
8a. Since Squealer is a pig and convincing the other animals about approving the fact that pigs would be able to have certain privileges would be able to allow himself to both become Napoleon’s “loyal comrade” and be able to treasure the privileges himself, he easily convinces the other animals by stating that pigs are the brains of the farm and needs to receive proper care. Most importantly, he states that if the pigs are not properly cared, Mr. Jones would come back. When the animals hear that Mr. Jones could come back, they automatically agree. (pg. 67)
9. Why would Napoleon blame Snowball for the windmill’s wreckage?
9a. Snowball is Napoleon’s rival and target because he stole the hearts of the animals with his intelligence while Napoleon was not convincing as a good leader. Napoleon has no excuses in the wreckage of the windmill, so he blames Snowball. (pg. 71)
10. Why would so many animals confess their “crimes”?
10a. Many of the animals are suffering Napoleon’s harsh way of living and would rather die than live under his rule. Thus, they confess crimes they may not even convicted so Napoleon’s dogs would slay them on the spot.  (pg. 84)

11. Why would Frederick scam Napoleon?
11a. Because Napoleon is an animal, Frederick believes that he could take advantage and get away with the fake checks (pg. 101)
12. What do you think caused the downfall of Animal Farm?
12a. First of all, Napoleon has completely changed the seven commandments to the pigs’ advantage. Because of this, the pigs are not becoming very effective. Additionally, Napoleon’s form of tyranny and harsh treatments causes the animals to think that maybe death would be better than living under his rule, and eventually suicides. (pg. 132)
13. Did the farm improve at the end?
13a. It definitely did not improve. In fact, the farm has eventually came back to the way it was.
14. Why did Mr. Pilkington congratulate Napoleon?
14a. He was surprised how Napoleon could make animals work so much without any specific treatment, He congratulated the pigs on “the low rations, the long working hours, and the general absence of pampering.” (pg. 138)
15. What does this story tie to?
15a. This novella related to the Russian Revolution for that it shows the different types of leaders. Napoleon and Snowball were described as Stalin and Trotsky.