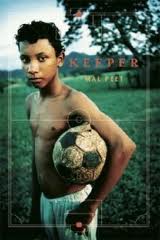 THE STORY:
El Gato is a renowned soccer player who wins the World Cup and is interviewed by the famous reporter, Paul Faustino. Gato starts a lengthy narrative of his life. One day as a young boy, he wanders into the jungles near the remote village he lives in and stumbles upon the Keeper, a mysterious ghost who begins to teach Gato how to become a superb and incisive soccer goalie. Years go by, and he quits school when he turns fifteen years old to work in a local logging business. Gato learns that his coworkers have a soccer match every week, allowing him to practice as a goalie. He gradually becomes such a superlative goalie that the owner of a major soccer team persuades him to join the team after he watches him play. El Gato’s parents reluctantly agree, and his adventures with the club eventually leads to the World Cup finals against Germany. Here, the game is in sudden death, and his team desperately needs him to block the shot of Tobias Mann, the German’s most powerful player, to clinch the team’s victory. Gato realizes this and cheats stealthily to block the strike to seal the victory for his team. Back in the present, he reveals this esoteric information and a major decision in his career that he is about to make to Faustino, who is taken aback. Then Gato also finds an astonishing piece of information that Faustino has that reveals the true identity of the Keeper.

The book, Keeper, is a classic rags to riches story where the main character is a destitute child who gradually rises to fame and fortune with the help of a mentor. The story grabs readers’ attention with its interesting storyline. There are unpleasant events that the main character faces, and there are exciting moments. However, it sometimes becomes repetitive because it mentions every detail about how the main character trains and plays soccer. For me, the book was unchallenging to comprehend because most of the time, the author chooses to use simple vocabulary. The book has a few adult words, and because of its straightforward language, I would recommend this book for the ages thirteen and fourteen. The author uses a plethora of literary terms such as foreshadowing, imagery, figurative language, and personification. As a result, Keeper can aid its readers in helping them recognize literary expressions. Overall, I would rate this book seven out of ten stars.

2. How does El Gato (or Gato) find the Keeper?
2a. Gato stumbles into a forest clearing while exploring and relaxing. Then he sees the Keeper eerily staring and waiting for him. (pg. 17)

3. Why does Paul Faustino seem so skeptical of Gato’s story in the beginning?
3a. Gato talks about how he saw tiny animals scuttling across the crossbar of a soccer goal as he was attempting to block one of the Keeper’s shots. (pg. 49)

4. Why was the Keeper extremely upset with Gato?
4a. Gato was being pessimistic and said he did not have the instinct to automatically block a goal shot. (pg. 63)
5. Why does Gato quit school?
5a. Gato turns fifteen years old, and his father forces him to quit school to work with him in the local logging business. (pg. 73)

6. Why was Señor Hellman impressed with Gato?
6a. Gato played as a goalie in one of the soccer matches between two teams at the logging facilities. His skills were unbelievably outstanding, which were enough to impress Señor Hellman. (pg. 103)
7. Who was El Ladron and what did he do in the story?
7a. El Ladron was from another logging camp who played against Gato in a soccer match. He was known for his sneaky style of play that caught opponents off guard. (pg. 123)
8. How did Gato earn his nickname?
8a. After displaying his soccer skills, the people of the town started calling Gato with this nickname (Gato means cat in Spanish). This nickname was given to him because “he is like the cat”. (pg. 107)
9. Who were the da Silvas, and why did Gilberto da Silva and his wife visit Gato and his parents?
9a. The da Silvas were the owners of a large soccer team, and after watching Gato play, they wanted to sign him for $10,000, a large amount of money to his parents. (pg. 136)
10. Why was Gato’s parents, especially his mother, so reluctant to let Gato sign with DSJ (the da Silva’s soccer team)?
10a. Gato’s mother believed and wanted her son to become a botanist, naturalist, or biologist. After all, Gato spent quite a bit of time in the nearby jungles because he was fascinated. (pg. 137)

11. Why was Pablo Laval and how did an injury to him affect Gato?
11a. Pablo Laval was the main goalkeeper for the DSJ soccer team. His injury let Gato replace him in games, and with more playing time, he was able to thrive and grow into a massive superstar. (pg. 161, 162)
12. Who was Ramos and why and how did he attempt to kill Gato?
12a. Ramos was another goalkeeper on DSJ, but he was supposed to replace Pablo Laval when he was injured. Since Gato stole his position, Ramos was extremely upset and hired two hitmen to assassinate Gato. (pg. 162 to 165)
13. How did Gato’s father die?
13a. After an incident at a bar the previous day, Gato’s father vomited heavily. However, he still went to his tree-cutting job the next day. When he went to vomit on the side of a hill, a freak accident occurred when a tree fell from a crane that had lifted it up. The tree tumbled down the hill and rolled over Gato’s father as if he was pizza dough. (pg. 175 to 179)
14. Why and how did Gato cheat in the World Cup finals?
14a. Gato’s team was playing in sudden death at the World Cup finals. Gato had to block the shot of one of the best German (the opposing team) players, Tobias Mann, to clinch the victory. Gato knew he could not unless he cheated subliminally, so he used a clever trick. Gato pointed at a spot for the opponent to place the ball, psychologically forcing Mann to take a shot Gato could block. (pg. 193)
15. Who really was the Keeper?
15a. The Keeper was a goalkeeper for one of the favorites to win the 1950 World Cup. However, his plane crashed in the jungle where he met Gato, and he has sought out to teach his skills to another as a ghost. It is revealed at the very end of the story when Gato stumbles upon a photo of Paul Faustino’s that depicts the 1950 team. Gato recognizes the Keeper among the many players. (pg. 215, 216, 223)