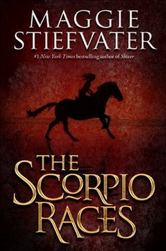 THE STORY:
Puck Connolly is a girl who is living in a house that will soon be taken by the government with her brothers, Gabe and Finn. They live by the sea, where every year in November, the government hosts a race known as the Scorpio Races. Gabe decides to move away this year, and Puck wants to do everything to stop him, including race in the Scorpio Races, a race made for men. The only way to delay Gabe from going is to join, so she does, ignoring all the commotion and the insults that go along with her decision. She trains her island pony to run in a race made for water horses, and while she and her brother and Finn are struggling to pull everything together, Gabe is away for days on end, avoiding Puck and Finn. She is awed and slowly befriends Sean Kendrick, a four-time winner of the Scorpio Races. To officially enter the race, Puck goes to the Scorpio Festival to finalize her registration. However, before she is able to complete her registration, Ian Privett, another competitor, tries to reason with her, telling her that no woman has ever joined the Scorpio Races. Meanwhile, Mutt Malvern tries to take away Sean’s reputation by taking another horse that seems faster than Sean’s own horse. Both Puck and Sean want to win, but they both know that there can only be one winner.

MY OPINION:
I never thought that I would like the book when a friend recommended it to me. I read the first few pages, and decided to read the rest of it. This book is interesting in a way that it makes sense, especially with the water horse eating people on November. There were good word choices, and nothing too complicated. There weaknesses in this particular book was that it was somewhat predictable, and that the ending ended strangely. I would recommend this book to older middle school students and young high school students because of the contents in the book. The meaning of what the author is trying to convey in the book is hard to understand unless someone is looking hard to find the moral. This is a really good book overall, and as the book goes on, there are unexpected plot twists and is interesting. I would rate this book nine out of ten stars.

STUDY QUESTIONS AND VOCABULARY:
FIRST SECTION
1. Why does Puck ride in the races?
1a. She wants to prevent Gabe from moving away. (25)

2. Why does Peg put Sean’s name at the top of the list?
2a. Sean has won four times; people think his name belongs at the top of the list. (64)
3. Why is Mutt not allowed to choose his own horse?
3a. His father wants Sean to choose his mount, because Sean knows the horses best. (131)
4. Who owns Corr, Sean’s horse?
4a. Corr belongs to Benjamin Malvern. (131)
5. Who is Mutt’s horse?
5a. Mutt’s horse is Edana, because she is the safest capaill uisce (water horse) that Sean knows. (131)

MIDDLE SECTION
6. Why does Puck want Sean to ride in the capaill uisce (water horse) that Sean offers to Puck?
6a. She knows that if Sean cannot handle the wild horse, neither can she, so she wants to see if she’s able to handle it, making Sean her pawn. (153)
7. Why does Puck go the parade?
7a. She has to sign up for the race there. (162)
8. Where is Gabe when Puck finds him?
8a. She finds Gabe at the pub gambling with some people. (172)
9. When Eaton rejects Puck from riding in the races, what does Sean say to make Eaton give in?
9a. He says that the sea would decide who lives and who dies, and that it shouldn’t matter that a girl can join a race that has been males only for a long time. (198)
10. Why does Sean quit working for Malvern?
10a. Benjamin Malvern does not accept his deals to buy Corr, so he quits. (219)

LAST SECTION
11. What does Mutt do to Edana?
11a. She slices her hamstrings so she couldn’t walk, because he thought that Edana was actually Corr. (340)
12. Why does Puck dream up stories of winning the races?
12a. She knows that she cannot afford to lose the races, and she wants to keep Finn’s hopes up (293)
13. How many times has Sean lost to Ian Privett?
13a. He has lost to Ian twice in all his years of racing. (367)
14. Why does Mutt want Skata?
14a. Mutt wants to defeat Sean by using Skata. Though she is fast, she isn’t used for her speed. Mutt knows that Skata is still wild on the inside, and that Skata can kill Puck or Corr.(387)
15. How does Sean get Corr?
15a. Finn gambled that Puck would win, and she had bets against her, because no one believe that she would actually win. She did win, however, and she bought Corr for Sean. (403)