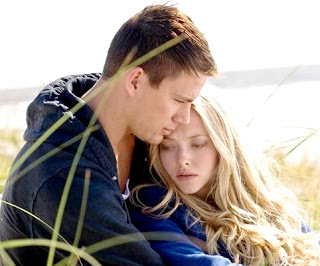 THE STORY:
In “Dear John”, a troubled young man named John Tyree comes back from his grueling years in the army to his father in Wilmington, North Carolina, and happens to meet (and fall in love with) a Habitat for Humanity volunteer, Savannah Lynn Curtis. Ensuing several successful dates with her, John realises that he has completely neglected his father, and decides to speak with him. Savannah, when she first meets him, is interested in his impressive coin collection, and overall makes a good impression on him. Regardless of her interaction with his father and his evidently strong feelings for her, John cannot help but feel as if it is all going to end when he returns to the army. However, he is distracted and rageful when Savannah, who is a college major in special education, diagnoses his father with Asperger’s disorder, in which the symptoms of social awkwardness and similarity of everyday schedules clearly match. In his anger, he strikes out at Randy, a young man who often pines for Savannah, and accidentally hits somebody close to her. After he apologizes, though, John and Savannah agree to write to each other when he returns to his military life. Although they propitiously exchange several love letters, their relationship suffers and eventually dissolves when Savannah unintentionally falls in love with Tim, a childhood hood friend whom she believes has been there for her more than John has. Not knowing what to do, John continues his army service for many years, but eventually travels back to North Carolina during his leave. Coming just in time to witness his father’s passing, he is emotionally chaotic when he discovers that Tim has cancer. He speaks with Savannah, who is now Tim’s husband, and learns that she has taken in Alan, Tim’s autistic brother, who inspired her to major in special education in the first place. As a last gesture of love towards Savannah, he sells his father’s coin collection, and donates the small fortune so Tim can receive Chemotherapy. Confirming that Tim has recovered through his lawyer, John finally decides to stay out of Savannah’s life so she can be happy with Tim and Alan.

MY OPINION:
During the first few chapters of “Dear John” by Nicholas Sparks, I believed that the book would be a sappy romance novel. However, as I continued reading, I discovered that there were many interesting messages hidden throughout the book. When I came to the plot, Sparks’s writing style made me feel the many emotions coursing between John and Savannah, such as passion, craving, and sweetness, but also the more dark aspects of their relationship, such as uncertainty, sorrow, and sad longing. Several scenes in the book, one such being John’s drinking after a bad day, are easily relatable to the ups and downs of an unstable marriage. Though, as I reached the end, I found that it was difficult to see the reasons of the constant fights that John and Savannah have. The last chapter, however, I found touching and thought that it gave a nice  twist to the typical romance novel, by splitting apart the lovers and creating a different kind of happy ending. I would recommend it to the ages of thirteen to sixteen, or from eighth grade to high school, as it includes some scenes unfit for elementary and early middle school. Overall, this book deserves nine out of ten stars for interesting theme, pivotal point, and storyline.

SECOND SECTION:
1.What is one habit that Savannah admits to John after their conversation about her bad college experiences?
1a. Savannah admits that she has a tendency to blurt out what she is thinking, and not thinking about how the other person would feel. The example in the text is when she tells John about how she was raped in college, and does not consider the fact that he might be uncomfortable discussing this topic. (104)
2. What is the disorder that Savannah prediagnoses John’s father with? What is John’s reaction?
2a. Savannah pre-diagnoses John’s father with Asperger’s syndrome, and John assumes that she only befriended him to “examine” his father, seeing that her college major was special education. However, after a fight with her, John soon realizes that she may be correct, and apologizes. (115-117, 131-132)
3. Why did Savannah diagnose John’s father and major in special education?
3a. Savannah diagnoses John’s father and majors in special education because she feels deeply about autism and developmental disorders. Her inspiration came from Alan, Savannah’s old friend Tim’s autistic brother. (115-117, 124-125)
4. What does John promise to Savannah before he flies back to battle in Germany?
4a. John promises Savannah to return to where she is and marry her. (133)
5. What does John do with his dad differently as he realizes that he may have Asperger’s syndrome?
5a. John calls him from the army base at exactly the same time on the same days because Asperger’s syndrome makes you uncomfortable when you do not have a daily schedule, or even if you stray from your normal one. Also, John’s father writes to him. (149)

THIRD SECTION:
1. Why do John and Savannah break up? When?
1a. John and Savannah break up because John is never around seeing that he is in the army. He finds
out when she sends him a letter when he is on the plane back to the base. (186-187)
2. How did John’s father pass away?
2a. John’s father passes away because he had a stroke, and was extremely weak.He passed away in a hospital, after being transferred from his house. (195-205)
3. Who does Savannah marry, and why?
3a. Savannah marries Tim, her childhood friend, because he was always there for her when John could not be. (229)
4. Where and with whom do Savannah and Tim live?
4a. Savannah and Tim live in his old horse ranch, with Alan, Tim’s autistic brother. (217, 231)
5. Why does John donate money? How does he receive the money?
5a. John sells his father’s coin collection give money so Tim can get his chemotherapy, or cancer treatment, and so he can recover, and not break Savannah’s heart by passing away. (271-275)