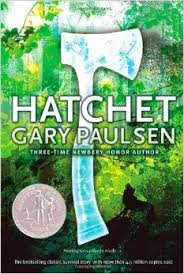 A thirteen-year-old boy named Brian Robeson is the only passenger on a small plane that is headed towards the oil fields of Canada. Brian is going to spend the summer with his father, and is exasperated that his parents have divorced. The plane suddenly starts to go down and Brian discovers that the pilot has had a heart attack and is now dead. Brian finds himself stranded on a island with only a hatchet that his mother has given to him. Brian realizes that it is going to take awhile for someone to notice that he is gone, and so he will have to learn how to survive in the wild. A couple of days later a rescue plane flies around the area where Brian is located but they do not see him. Brian starts to stop believing that he will be found. As days go by, Brian becomes tougher and more mature than he was before. He learns how to make a bow and arrow, to fish, to hunt birds and rabbits, and to create a shelter. He has dealt with a skunk, a moose, a porcupine and a tornado. The tornado changes Brian’s way of living in the wild. The tornado demolishes everything Brian built. It even moves the crashed plane closer to the shore where Brian is staying. Brian starts to think about how he can use the plane as a resource. Brian remembers that there was an emergency pack in the plane. He begins to collect items on the shore that would assist him in getting to the crashed plane.

When I got assigned to read Hatchet, I knew I wouldn’t like it since I hate reading, but after reading a couple of chapters I was intrigued by the story line.  Brian’s life has been changed since his parents got divorced.  While he was stranded on the island, he learned many new skills, such as making a fire, hunting, fishing, building a shelter. He started to mature and become emotionally stronger.  Through Brian, I learned that maturity can arise from many different situations.  Maturity is not just about getting older.  It is about how you handle yourself in tough situations.  The words that the author uses in the story are complicated and hard to understand.  The author’s use of words create a clear image in the readers’ minds.  I would recommend this book to middle schoolers because of the high vocabulary and the exquisite story line.  I give this book eight out of ten stars.

2. Why did the Cessna crash?