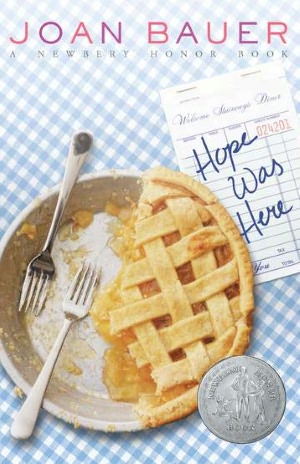 THE STORY
The story revolves around teenage waitress Hope, when she moves to the small town of Mulhoney, Wisconsin from New York. Her aunt Addie is a cook and has raised her since childhood, and they have found new work taking over a restaurant there after a man named Gleason Beal steals their money. At The Welcome Stairs, they meet G.T. Stumps, proprietor and owner of the restaurant, Braverman, who runs the grill, and many other acquaintances and workers of The Welcome Stairs. G.T. Stumps has suffered from leukemia and after chemotherapy, has recovered. The leukemia is likely to come back though, and before he leaves the world, G.T. wants to do something for Mulhoney, deciding to run for mayor. G.T. is known as a kind and generous man, but his opponent, former mayor Eli Millstone,  has copious amounts of support from a big dairy company that fuels his campaign and provides many of the citizens in Mulhoney with jobs. Even with G.T. uncovering a scam that shows how Eli is stealing money from all of the citizens’ taxes, competition is high. Hope tries to help G.T. succeed with his campaign against Eli while making new friends from high school that also support his campaign, mending relations and doubts with her mother, and receiving G.T. as an unlikely new father, when he ends up together with her aunt.

MY OPINION
In the story, the author uses a writing style similar to that of the main character narrating to the reader, and uses many food-related words and vocabulary. The word choice is slightly challenging but for the most part comfortable, and is recommended for the age group of twelve years of age and above. The story has a political spin which is a recurring theme all-throughout, and though I think the plot is amazing, for people who abhor realistic fiction, I would not recommend this book. Out of ten stars, I would recommend this as a nine.

1. Why does Hope write ‘Hope Was Here’ and tape it on The Blue Box when she leaves?
1a. She does it to leave a statement that she was at this place and made an impact. It is also a way of saying good-bye to the restaurant. (3)

2. Why is it important to hope and Addie to watch the customers coming out of the restaurant before they themselves enter?
2a. They want to analyze the kinds of customers that visit the restaurant and how they feel towards the food. (The sign is that if you eat good enough food, you start talking.) (15)

3. What is the reason that Addie and Hope go to Mulhoney, Wisconsin?
3a. A man takes all of their restaurant profits in New York, and they are offered to replace the owner and head chef of ‘The Welcome Stairs,’ G.T. Stoops, because he has leukemia and wants to be mayor. (22, 31)

4. Why do people have doubts about voting for G.T. Stoops?
4a. Even though he has positively contributed to the community, many of the townspeople work for the corrupted dairy that G.T. is trying to close down, and they don’t want to vote for a dying man. (41)

7. How does Pastor Hall convince the Election Board administrator to extend the ballot time limit?
7a. He starts a sermon about mistakes and mercy, then pressures her into agreeing that she also has mercy and empathy and that she can extend the deadline to 5:00 p.m. (80)

8. What happens to the Daylily Mavis gives Hope, and what does it symbolize?
8a. After placing it in the sunshine with water, the withered flower transforms and becomes beautiful with blossoming petals. It symbolizes Mavis’s advice to Hope, ‘Remember the Power of the Light’  (83/84)

9. What does the poem about zebra stripes mean?
9a. It means that the poet lost his identity like a zebra without its stripes, even though deep inside he knows who he is, because he is ‘all of us’ and shouts for everyone. (89)

10. What happens when houses are robbed, all of which are houses of people who support G.T.’s campaign?
10a. There’s a large clamor in Mulhoney, and Officer Babcock tries really hard to uncover who committed it. The press goes wild, and in the end, it’s a scandal committed by G.T.’s opponent, Eli Millstone. (100)

11.What does the boat in the painting symbolize?
11a. It symbolises troubles. A good sailor knows how to control the ship and use the wind to his advantage. No one can be a real sailor until you sail into a storm and test yourself. (125)

12. Why is Hope intent on having Mr. Woldenberg warm up to her?
12a. It tests her waitressing abilities. Mr. Woldenberg is the toughest customer she has ever received, only ever buying grilled cheese sandwiches and having never voted in his life. (128)

13. What happens to Hope when she meets her mother?
13a. She finally tells her that her mother has to call her Hope instead of her old name Tulip, and earns her mother’s respect with her waitressing skills while her mother watches. (139-141)

14. How does G.T. win the election for mayor at the last minute, even with his cancer?
14a. The previous mayor and G.T.’s opponent, Eli Millstone, cheats to win the election by adding 120 more votes from people who claimed that they didn’t participate in the voting under his name, and Hope finds this out after she asks Mr. Woldenberg about voting for Eli Millstone, which Mr. Woldenberg hasn’t done. (165)

15. Why does Hope read her letter to Gleason Beal to G.T. instead?
15a. Though G.T. is about to die from leukemia, she wants him to know the reason why they came to Mulhoney, Wisconsin in the first place, and what it means to her that he is now her father. (179-180)