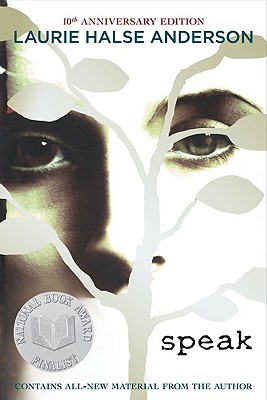 Melinda Sordino, a fourteen-year old girl, no longer has the same aspect of her society after a maiming experience at a party over the summer. As if things are not bad enough, her friends leave her, unaware of the truth. With no one at her side, she notices feelings of isolation, seclusion, and loneliness. There is one friend named Heather who has moved from Ohio, but she moves on for the popular girls. Regretfully living her life, Melinda goes through hardships to the point where she self-harms. Family is not an option either because she has a distant relationship with them. She completely loses a grasp of who she is. Our protagonist is unable to hold herself together at first, but manages to truly find who she is through art. A gradual development of a drawing of a tree parallels her maturity and faith in herself. Her art teacher, Mr. Freeman helps her express feelings and reveal emotions. Despite the silenced and shameful life she was living before, Melinda is able to pull through. Up until this point, she has been mute over a raping incident, but is now portrayed as a valiant teenager who fights back at difficult times. It may have taken a year to slowly recover, yet, she is informed on what lies ahead. Whether it is satisfying or gruesome, Melinda is prepared. She is progressively being able to find her voice within the society and speak.

Anderson’s strengths include the clarity and the directness of the book. There are no parts open to question, and the symbolism is clear too. The gradual development of a tree parallels Melinda’s (the protagonist) maturity throughout the story. However, a downside is the slowness of the climax. Evidently, the book builds up to the central moment, but the climax is not established until the book is near the end. The author could have elevated the vocabulary as well, but I feel as if the words she chose are intentional. Therefore, I cannot argue that the words are badly chosen. Those who are in their teenage years will enjoy this novel. It is more likely for them to relate to this book than other age groups. They are also able to get a basic understanding of the disturbing moments (e.g. rape) that people our age go through. I would doubtlessly choose this book again. I was able to place myself in the position of someone who seems like an average teenage girl, but experienced something horrid that traumatized her for life. I give this book a rating of eight stars out of ten.

2. What does Heather become upset about?
2a. Heather becomes upset over not being noticed in school where she no friends, and nobody cares about her.

3. How does Melinda describe the school’s faculty lounge?
3a. It is described as a small green room with dirty windows and a lingering smell of cigarettes.
4. Among all the students, who is adored by the gym teachers and shows the most potential?
4a. Nicole is the most adored and has potential.
5. Why does Melinda’s mom bake a turkey on Thanksgiving even though Melinda and her dad do not like it?
5a. Her mom believes that eating turkey on Thanksgiving shows that the three of them will be a family for another year.

6. What is something ironic Melinda notices in the hospital’s cafeteria?
6a. Instead of doctors eating very healthy, they are consuming foods that are extremely unhealthy such as big greasy cheeseburgers.
7. What happens to Melinda when dissecting a frog?
7a. She passes out once she starts cutting open the frog’s belly.
8. Why does Heather decide to not be friends with Melinda anymore?
8a. Heather states that they are too different, but the author implies that Heather wants to hang out with the “popular and cool” kids.
9. Melinda receives a Valentine’s day letter. Who is it from? What is her reaction?
9a. The letter is from Heather. Melinda was excited at first, thinking it was from a boy. However, after realizing it is from Heather, she is disappointed.
10. Why does Melinda and her family have a meeting with the principal and the guidance counselor?
10a. Someone (we do not know who) has noticed Melinda’s absences and reported it. Also, they need to discuss Melinda’s grades.

11. Who is revealed as “IT?” What kind of person is “IT?”
11a. Andy Beast (Evans) is an aggressive senior that one would never want to encounter. He is very rude and is a bad influence.
12. What type of vandalism or graffiti does Melinda write in the girls’ bathroom?
12a. Melinda writes: “Guys to stay away from– Andy Evans.”
13. Why does Melinda reject Heather’s offer in helping her in decorating the ballroom for prom?
13a. Melinda does not want to help what she calls a “self-centered and cold used-to-be friend” that only comes to her when desperate.
14. What secret does Melinda reveal to her ex-best friend, Rachel?
14a. Melinda finally says that Andy Evans, Rachel’s current boyfriend, raped Melinda at the end-of-the-year party.
15. Andy assaults Melinda. What is the good result from that?
15a. Melinda suddenly becomes popular at school.