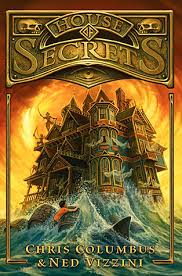 Cordelia, Brendan, and Eleanor Walker live with their parents, in San Francisco, during their extreme financial crisis. An eccentric incident happened, causing their father to lose his job and give up all their belongings, so they must relocate. However, the children are distraught when their parents buy a low-priced Kristoff House, especially after a mysterious woman appears and demolishes it. She was the "Wind Witch" and the daughter of the original owner of the house, Denver Kristoff. In the accident the children's parents disappear leaving bloody traces behind. Cordelia, Brendan, and Eleanor are tangled up in three novels written by Kristoff himself. The enchanted worlds in those novels are ruled by the witch. The Wind Witch appears before them, saying that their mission is to find a terribly powerful book that she can not touch, due to a spell placed by her father. She promises to release their captured parents if they do so. The siblings go on this mission, and on the way they meet Will, an extrordinary character from one of the novels, who vows to protect the siblings during the dangerous adventure. They go through a series of adventures that have them battling giants, pirates, and medieval soldiers as they struggle to stay alive in a house that soon becomes a vehicle. Toward the end, the siblings are captured by the pirates, at the Witch’s palace, when Eleanor discovers the secrets to using the powerful book to fulfill her sincere wish of returning to her parents and out of this catastrophe.

When I first opened this book, I knew it would be an action-packed book, a thriller, and a page turner. The authors makes the book very suspenseful and provides good descriptions of the characters. The main characters, who were the three young siblings, were all wonderfully unique and smart.  I loved the close relationship the three of them had. They were so caring & loving toward each other, and displayed extreme courage, not letting their spirits be utterly helpless in a time where they were almost certain that their parents were no more. Some problems the siblings faced together are similar to the problems that teenagers often face in their daily lives. The authors’ word choice was exceptional, which created detailed and lively films in the reader’s mind. Nevertheless, the novel did have some weaknesses. The action of the story was somewhat overwhelming for the reader, and the events in the plot happened suddenly and rapidly. There was not too much character development, as the story progressed into more crucial moments of the plot. I would recommend this book for middle schoolers who are at the ages of 11-13. Overall, I would rate this book 7 out of ten stars.

1. What was the “incident” that caused Dr. Walker lose his job?
1a. Dr. Walker was a surgeon, and one day he fell asleep in the break room of his hospital. When he woke up, he was standing over a patient, with a scalpel, to do a surgery. But instead of doing his duty, he carved a symbol, an eye, into the patient’s stomach. That symbol was the symbol of the powerful book, The Book of Doom and Desire. Dr. Walker was fired and sued, and his family’s two cars and amazing house was taken away.

2. Who owned the house on 128 Sea Cliff Avenue?
2a. Denver Kristoff owned the house, and his daughter was named Dahlia, who turned into the Wind Witch, later.

3. Why did the evil Wind Witch curse the Walker siblings?
3a. She cursed the siblings because Cordelia, the eldest sibling, stole a book from the witch’s father’s ancient library.

4. What were the two Kristoff books that the Walker siblings were trapped in?
4a. The Savage Warriors and Fighting Ace were the two books.

5.Why did the Wind Witch send the siblings into her dad’s old stories?
5a. She wanted them to find the most powerful book in human history, The Book of Doom and Desire. Denver Kristoff and Ruther Ford Walker, their great – great grandfather, found this book. Kristoff hid it and put a spell on it, so that itwill never be visible to his daughter.

6. What did Will and the Walker siblings realize after hearing a sibilant noise caused by the punctured barrel?
6a. They found out the barrel was under the Kristoff house, releasing air. They could hear the hissing noise of the pumped and released air, because the walls were hollow. Hollow walls meant passageways, other rooms, hidden chambers, and hidden treasures and secrets within the house.

7. Where did they end up as the giant colossus set the house down?
7a. The Kristoff House slid down a rock and slippery cliff, and fell into the raging waves of the ocean.

8. What was the third book they were caught in?
8a. They were caught in The Heart and The Helm, in which blood thirsty pirates did vivisections on live bodies/humans, and sliced them up to deprive their bones and organs, and used their bones for making their magical cabin.

9. Who was Penelope?
9a. Penelope used to be a maid for Denver Kristoff, and was treated very miserably by him. Denver killed Penelope to save his daughter from powerful Book of Doom and Desire. Brendan found her broken skull and skeleton in a hidden closet. Magically, by connecting the skull and skeleton, Penelope came back to life again. She helped the Walkers in their quest, a lot.

10. When and how did Eleanor see The Book of Doom and Desire?
10a. When Eleanor had the selfish thought of pushing Cordelia into the ocean while she was sleeping, the book appeared before her. She had that thought because when Cordelia wakes up, she would want to desperately save Will and Penelope from the pirates’ human dissection, not focusing on getting the special book and reaching their parents. The Wind Witch, in disguise of Eleanor’s parents, tempted her open the enchanted book, but when she refused to, the witch appeared in her true form, screamed at her, and attacked her.

11. Who was the last person to see The Book of Doom and Desires?
11a. Cordelia was the last person, and she got so tempted by the book that she opened it. When she opened, she started transforming into the Wind Witch, but Will saved her by tying her down and throwing the glowing book into the ocean.

12. What happened to the Walkers, in response to the event that Will killed Captain Sangray?
12a. His brother, Captain Slayne, tied the Walkers up and sent them to the Wind Witch, their queen, so that she could use them as a pawn, for her own heinous desires.

14. Who fought with the Wind Witch at the end?
14a. The Wind Witch fought with the Storm King, who was Denver Kristoff, her father, because she wanted to use the book to fulfill her desire of never dying, and eternally controlling the entire world. But her father, does not want his daughter to become as evil, ruined, horribly looking as himself, which was the result of using the book too much.