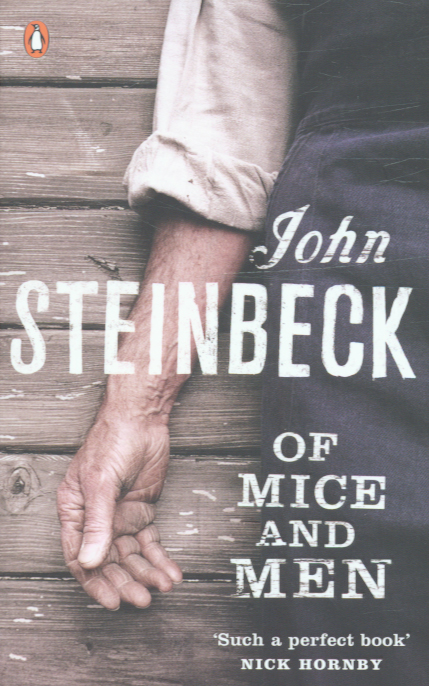 In the beginning of the story, two men called Lennie and George travel through the Salinas near the south of Soledad, to a farm in hopes to find a new job. The author shows shows that Lennie is mentally ill because he portrays Lennie as a child who talks and acts different from others.  Because of his mental illness, George tries to control Lennie and act like his guide, but Lennie continues to act like a child.  Throughout the story, Curley tries to intimidate Lennie and at one point, Lennie tries to beat him up.  Lennie is then hated on because of his actions.  When Lennie kills a puppy in the barn, Curley’s wife comes in and talks to him.  Lennie tells Curley’s wife his obsession to pet soft things and she allows him to feel her hair.  Curley’s wife starts to scream when he starts to pull on her hair and Lennie accidently kills her in attempt to quiet her.  Since George understands Lennie’s disability, he understands that it was unintentional, but society looks at it differently.  George soon realizes that Lennie cannot continue to live that life because of his actions.

I recommend this book to the people who like more realistic events than fiction.  Because of the language and what the content of the book talks about, I would recommend this book to people in high school or 8th grade.  The language may be too mature and the content may not be suitable for people.  The vocabulary was not too challenging although there were a few words here and there that I needed a dictionary for.  The author was very descriptive throughout the book and I could imagine what was happening clearly.  I also felt like this book had a lot of meaning and relating to our society.  The author showed their heavy accents very well.  Although I thought the story was very well written, I thought the vocabulary could be improved.  I would rate this book eight stars out of ten.

1.  Why does George become angry when he notices the dead mouse in Lennie’s hand?
1a.  He becomes angry because they are on their way to meet the boss at the ranch they are going to work at and Lennie’s behavior has to be tolerable. (8)

2.  Why does George go recover the dead mouse?
2a.  He recovers the dead mouse because Aunt Clara used to give him a mouse to pet, but he would unintentionally kill them.  (10)

3.  Why does George always speak for Lennie?
3a.  George does not want to show that Lennie is very unintelligent to the boss.  (16)
4.  Who does George and Lennie work under and what is their job?
4a.  They work under a guy named Slim and they are part of the grain team.  (26)
5.  Why is Curley’s temper so bad?
5a.  This is because of his marriage with a woman who likes to flirt with other men.  (28)

MIDDLE SECTION
6.   Why does Slim say “seems to give a damn about nobody”?
6b.  Slim knows like George and Lennie’s friendship and thinks it’s good for the world that he thinks is cruel.  (39)
7.  Why did Lennie have to hide in an irrigation ditch?
7b.  Because a girl accused him of rape and in order to escape the mob that was coming after him, he had to hide.  (42)
8.  Why does Curley attack Lennie?
8b.  Curley needed to take his rage out at something and since Lennie was naive like a child, he was an easy target.  (62)
9.  Why does Crooks tell Lennie to go away?
9b.  Crooks tells Lennie to go away because Lennie is Caucasian and Crooks is African American.  (68)
10.  Why does Lennie become angry?
10b.  Crooks tells Lennie that George may not return home ever and that causes Lennie to become protective and angry and want to know who hurt him.  (73)

LAST SECTION
11.  Who was Curley’s wife referring to as “the weak ones”
11c.  Lennie and Crooks who were daydreaming at the moment.  (77)
12.  What does Lennie do when George throw the pup across the room?
12c.  Lennie runs to it and strokes it because he cares about it unlike George.
13.  What does Lennie do to cover up Curley’s wife’s dead body?  (85)
13c.  Lennie tries to hide Curley’s wife’s body in hay because he is afraid that George will get mad at him.  (92)
14.  Why does George kill Lennie?
14c.  He thought it was the best for him because he has no way out of the situation after he killed Curley’s wife.  They would lock him up if they brought him in.  (97)
15.  What does George do before killing Lennie?
15c.  He tells him to go to his cave so before he is killed, he feels comfortable and happy.  (100)