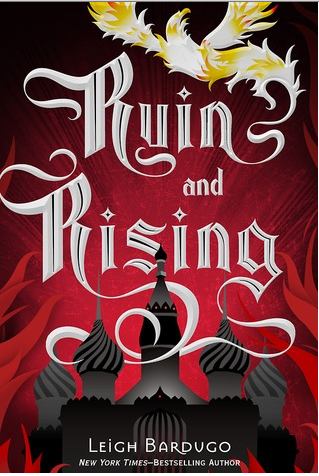 Alina Starkov is a Grisha and a sun-summoner, although she is a little rusty. She has one of the most powerful ranks in all of Ravka, and everyone wants to try to keep her safe because the Darkling wants Alina so that he could put her under his rule. The Darkling rules Ravka from the Shadow Folds, which is a dangerous forest where terrifying creatures lurk. The Darkling has an army that is exceedingly successful, and Alina has an army that is the remainder of what was once a good army. Everyone is on the hunt for the Firebird that is going to destroy Ravka.  Days before the great battle, the Darkling told Alina some other news that would change the way she saw things. He told her that he has hostages, some were teachers and children. They were caught by the Darkling to try and distract Alina from thinking about how he is going to destroy Ravka with the firebird and Mal. Alina has two big dilemmas, the first one is that she needs to save the hostages, and the second one is that she needs to save her boyfriend and ragged tracker, Mal. Mal is the only person who knows where the Firebird is. The Darkling wants Mal so that he can destroy Ravka. Mal, short for Malyak Ostretsov, has to fight against the Darkling to save the kingdom and free Ravka with Alina. But sometimes, Alina will have to sacrifice the future that she was fighting for.

Personally, I thought that some of the strengths for Leigh Bardugo was the fact that she added a great amount of detail even to the “not-so-important” parts of the story. I feel like her backstory also has an impact on my opinion of her book. She went to Yale University and she is also a recreational singer in a band in Hollywood. She has also written two books before this one which makes her an experienced writer. Some of her weak points was the fact that she did not add as much vocabulary words as I would have liked it to be. That way it was a little bit of an easy read for me. The age group that I would recommend this book to would be younger middle school students about seventh grade level. If I went back in time, I definitely would have chosen this book. Overall, I would grade this as an eight out of ten.

3.What do people call Alina?
3a. People call Alina Sankta.(51)
4. How does Alina feel about Zoya and Adrik? Why?
4a. Alina is feeling very annoyed at Adrik and Zoya because Zoya wants to move away from Adrik and Adrik wants to be next to Zoya.(87)
5. What job does Alina have when they are crossing the mountain of West Ravka?
5a. Alina has the job of being a mapmaker(133)

MIDDLE SECTION
6.What happened to Genya? Who let Genya’s name slip
6a. Genya’s real name was leaked out by Sergei and Genya had her real name spread. Now she cannot use the code name Genya anymore otherwise then she will be in even more trouble.(149)
7. Why was Sergei missing from the castle?
7a. Sergei was missing at the castle because he put Genya in trouble now and Genya used to be his friend.(169)
8. Who is Magnus Opjer?
8a. Magnus Opjer was a sailor and he made his money by shipping across the seas.(187)
9. Who was in Alina’s room?
9a. The Darkling was in her room, sitting on the edge of a table, ready to talk to her about some serious matter.(197)
10. What did the constructors build a church over?
10a. They built a church over Alina’s father’s workshop.(224)

LAST SECTION
11. What did the road lead to?
11a. That road led to the gray grass and gloomy trees. It was actually the sight of prisoners and the last person that was still alive planted a tree(291)
12. What did the Darkling say to Alina about the hostages?
12a. The Darkling said that in five days, he will return and Alina will bring Mal of he will push the Dark Forest all the way back to the village and also kill the hostages.(322)
13. What were the different things Alina was trying practice to get ready for the battle against the Darkling? .
13a. Alina practiced her sun-summoning skills and she was also trying to take five grishas out at a time so that she knows the equivalent to the Darkling’s power.(333
14. What happened at the war against the Darkling and what did Alinan have to do to save Mal?
14a. Alina was shot in the soldier, but that did not stop her. She had to get up to save Mal from the Darkling so that Mal would not have a miserable life. Alina got up and stabbed Mal.(377)
15. What happened to the Darkling?
15a. Alina was so mad at the Darkling, that she stabbed the sword deep into the Darkling’s heart. His legs were shaking and he tried to make himself from falling, but it was too late, he died.(383)