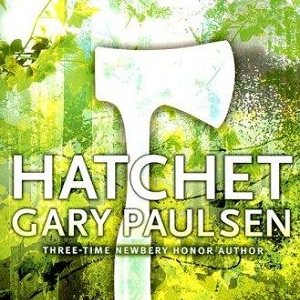 Brian Robeson lives with his mother after her parents divorced when his mother met a man she liked. The court had told Brian that he was to live with his mother, but his father could see him during the summer. Since it is summer, Brian is flying on a two-man jet to see his father in the northern Canadian woods. However, the pilot experiences a heart attack and dies, leaving Brian at the controls. Brian tries his best to control the airplane and crashes it into a lake. After making a lean-to and finding berries that made him sick, Brian wants to eat something different, and makes a fire that he never puts out in the process. However, one day, a search plane flies past Brian’s camp, but does not see Brian. His faith that he will be rescued is ruined, so he attempts suicide by cutting himself with his hatchet. After surviving the attempt, Brian is determined to make the new Brian who will be positive. He teaches himself to make more weapons to hunt, and soon becomes more comfortable with living in the wild. One day, he decides to find the safety pack that he knows is in the plane. After a couple of days, he gets it and knows he can survive longer to await rescue.

The beginning of the book was a little confusing because I did not know where he was going and what situation he was in. However, the main storyline became very clear after his first few days of surviving on his own. I think that this book does not include the most interesting verbs, but had a point of transformation that I had never thought about. After thinking about it, I realized that a failed suicide attempt could easily change someone’s ideas and thoughts about their life. I liked the plot a lot and can imagine all the details the author put in. The author put a lot of sensory detail that I liked.  The book is relatively easy to understand and I would not recommend it for an eighth grader. Instead, I would recommend it to a sixth grader. I would give this book eight out of ten stars.

1. Why is Brian going to Canada?
1a. Brian is visiting his father after his parents were divorced because of his father’s visitation rights of his father.

2. Why is there a strong odor on the airplane?
2a. The pilot is not feeling well and will soon have a heart attack.

3. Why did Brian’s parents divorce?
3a. His mother forced a divorce because she got to know another man.

4. How does Brian realize that it could be a long time before he is rescued?
4a. When Brian thinks back to the amount of time he spent flying in a possibly wrong direction, he knows the search crew will take a while to find his location.
5. Why does Brian start to build a lean-to?
5a. A long time ago, Brian and Terry had decided that lean-to is the best type of shelter.

MIDDLE SECTION
6. Why does Brian throw up one morning?
6a. He ate too many gut cherries.
7. What gives Brian a lot of pain in his calf?
7a. A porcupine had stumbled into his lean-to.
8. What prompted Brian to try to build a fire?
8a. Brian had a dream where his father and Terry told him to build a fire.
9. Why does Brian start to catch fish?
9a. From the stone bluff, he saw a lot of fish and realized that it was a consistent source of food.
10. Why does Brian lose most of his hope of being rescued?
10a. Brian saw a search plane that turned away without seeing him.

LAST SECTION
11. What did Brian realize he needed to do to catch foolbirds?
11a. He needed to look for the outline of the bird.
12. How did Brian make his arrows fly straight?
12a. He used slivers of his windbreaker as the feathers on regular arrows.
13. How did Brian break his ribs?
13a. A moose rammed Brian into the lake.
14. Where does Brian find the survival pack?
14a. He makes a whole in the tail of the plane and finds it there.
15. How long had the searchers given up when he was rescued?
15a. It had been a month since the rescuers had given up, but he was eventually found by a pilot.