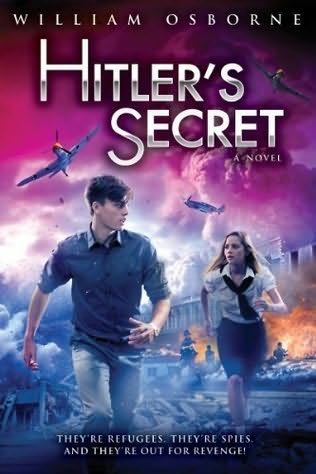 [In Hitler’s Secret by William Osborne, an orphaned German boy and an Austrian refugee girl, are given top secret orders by the British government, to go to Germany and bring back a child, who is vital to the stopping of the Nazis. They later figure out that the child is Angelika, Hitler’s daughter. For the dangerous mission, the boy and girl are given the fake names, Otto and Leni Fischer. They are supposedly visiting their godmother, who lived in Germany. Otto and Leni are given training with guns, hand to hand combat, swimming, and other survival tactics that would come in handy for being a British spy in Nazi Germany. Otto and Leni go to Germany and find Angelika in the convent she was raised in. Leni sneaks inside and gets caught by a nun, who she knocks out. She quickly tells Angelika that she is rescuing her and taking her to her parents. The gullible nine year old believes her and goes with Leni. Otto, Leni, and Angelika dye their hair blond to fit in with the Germans. They plan to catch a train to Munich, and then bike all the way to the Swiss border, where British Admiral Macpherson will be waiting for them. When Otto sees Munich, he tries to go to his old house, which is now a Gestapo officer’s house. He is captured and sent to Reinhard Heydrich, a high ranking Nazi officer. Heydrich cruelly forces him to talk by poking an icepick through his hand, and pinning Otto to a wooden table. Leni rescues him, and the trio starts biking. All of Germany is notified to keep a lookout for three children, with the descriptions of Otto, Leni, and Angelika. ]

[I thought that this book was a well written piece of historical fiction. William Osborne wrote it in such a way, that it felt almost real, and not a work of fiction. I liked how he used some real people in the story, like the Nazi officer, Reinhard Heydrich, and the German mystic, Ludwig Straniak. Otto and Leni had to overcome many obstacles that other teenagers would not have to face. They had to be smart, be on the lookout at all times for Nazi officers, and be able to shoot people without blinking an eye. Otto and Leni had to give false hopes to a depressed nine year old. This book is filled with vivid content on every single page. I thought that this book should be for readers 12 years and older, because there is some graphic violence in the book. I would rate this book ten out of ten stars, because it was so interesting, that I could not put it down.]

2. What insult does Catchpole say, that irritates Otto the most?
2a. Otto hates being called “ Nazi Boy.”

3. What was Otto and Leni’s fake father’s name, and what was his job?
3a. Kurt Fischer; captain with the Afrika Korps under General Rommel in Libya.

4. What is the name of the girl, Otto and Leni were asked to find?
4a. Her name is Angelika.

6. Who shot the mother superior, and why?
6a. Reinhard Heydrich shot the mother superior, because she let Angelika escape under her watch.
7. Where did Otto decide to take a train to, and what was his reason?
7a. Munich; Otto thought it was an unexpected destination, and the Germans would never guess that they were there.
8. Why did Angelika get lost in Munich?
8a. She wanted to look at a house that looked familiar to her, so she went there without telling Leni.
9. Which way did Otto tell the truck-driver he was going?
9a. Otto told the truck-driver that he was going South.
10. Why didn’t Otto shoot the woman  on the train?
10a.She fainted, when he pointed his gun at her.

11. Who rammed an ice pick through Otto’s hand, pinning him to the table?
11a. Reinhard Heydrich rammed an ice pick through Otto’s hand.
12. Why did Heydrich want Straniak to work for him?
12a.Heydrich wanted Straniak, because he was a mystic with a magical pendulum, which would locate the British agents.
13. Why did Otto have cyanide?
13a. Otto kept the cyanide, to give to Angelika if they got caught. He wanted Angelika to be dead, than to be a prisoner of the Nazis.
14. Why did Angelika let go of Otto’s hand, and let herself fall to her death?
14a.Angelika realized, that if she held Otto’s hand any longer, his injured hand might slip, and both of them would die. If she let go, he would live.
15. What are Otto and Leni’s real names?
15a. Leni’s real name is Rebecca, and Otto’s real name is Conrad.