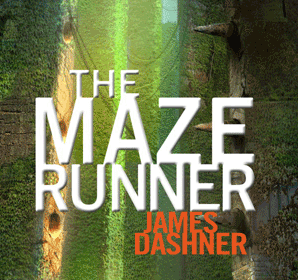 THE STORY:
Thomas, the main character, comes to the Glade and finds that everyone is a boy. In a couple days someone new comes. She is a girl, and her name is Teresa. This is different for everyone since everybody in the Glade is a boy. After Teresa shows up everything becomes different, she triggers something called “The ending”, and everything becomes weird. A griever acts like it is asleep or dead, but when Alby approaches it it stings him. Thomas rushes into the maze without any idea of how to get out or how to survive into the maze to help Minho save Alby. By that time Minho thought Alby was dead so he left him there. Thomas put him up on a branch and ran through the maze with the grievers on his tail. Minho finds Thomas and they get Alby out of the Maze together. The gladers need to find a way out of the maze soon or they may all die. That happens with the help of Thomas. He must get stung by the griever to get his memory back. When he gets his memory back, he tells everyone some very important things, like how the maze was created and how to escape. Afterwards, they  find a pattern in the maze maps. The maps put together, one on top of the other, spells words. The following day some gladers follow Thomas into the maze and they escape with most people still living.

MY OPINION:
James Dashner provides a good amount of made-up words like “shuck” which a curse word. He uses some figurative language like “concrete ideas” (pg 449). This book had good word choice and provided a reasonable amount of vocabulary words. I think around the seventh grade to ninth grade age people would like this book because of the complex ideas and interesting wordage. James Dashner wanted to be a writer since he was a young boy, and was inspired by “The Lord of the Flies,” and “Ender’s Game.” He writes books very well and uses some descriptive language as well. If I could go back in time I would definitely choose this book again because of its use of descriptive and figurative language. It also has a good story line and god vocabulary words. I would give this book 8 out of 10 stars because Teresa was not really needed in the story and I was asking myself why she was there in the first place because Thomas could have played her role as well as his.

1. What happens to Ben after he goes through the changing?
1a. Ben goes through the changing and comes out crazy and bloodthirsty. (51)
2. Why do the doors close every evening?
2a. The doors close every evening so that the Gladers do not get stung by the grievers. (94)
3. When Teresa comes up in the box, there is a paper. What does the paper say?
3a. The paper says, “She is the last one. Ever.” (107)
4. Which Keeper is Thomas sent to first?
4a. Thomas is first sent to Winston, who chops meat. (138-139)
5. What is a slopper?
5a. A slopper cleans toilets, showers and things like that. (173)

6. Why does Thomas go into the maze after Minho and Alby?
6a. He sees 2 gladers that are in need of help and tries to help the them. (275)
7. After Thomas and Minho come out of the maze the council holds a meeting. What does Minho request Thomas become?
7a. Minho requests that Thomas becomes the Keeper of the Runners. (262)
8. Why does Winston vote “no” for Thomas to become a runner?
8a. He votes “no” because he believes that Gally should have some say in the decision(277)
9. Why does Minho say that Thomas should be Keeper?
9a. Minho says that because “Aim high, hit low” is one of his mottos and it leads to Thomas becoming a runner. (278)
10. Who does Chuck ask for after the council meeting?
10a. Chuck asks for Thomas after the council meeting. (311)

11. What words does the code using the maps make?
11a. The maps make the words, “FLOAT, CATCH, BLEED, STIFF, PUSH.” (605)
12. Who enters the code words in the griever room?
12a. Teresa enters the words. (613)
13. After everyone is out of the maze, who do the creators kill by mistake?
13a. While the creators try to kill Thomas, Chuck, steps in front of Thomas, therefore killing him. (636)
14. Thomas and Minho follow a griever to the cliff. What do they find there?
14a. Thomas and Minho find the opening in the which they escape the maze. (412)
15. The first night the doors don’t close, what do the gladers do?
15a. All the gladers pile into the Homestead so that they are all safe. (448)