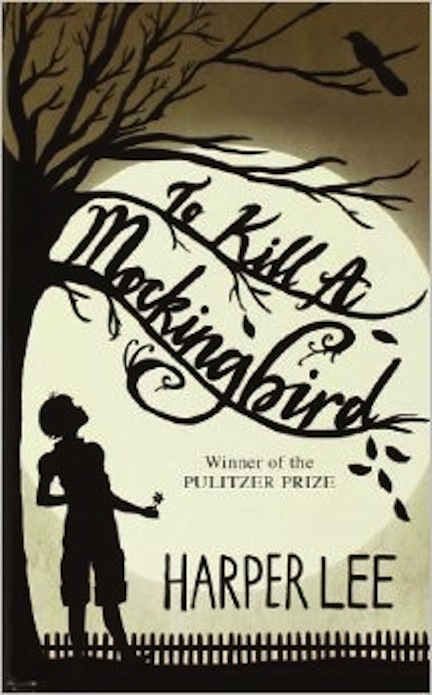 THE STORY:
Jean Louise Finch (Scout) lives with her father, Atticus, and brother, Jeremy, in a district called Maycomb County, southern Alabama, in the 1930s. During that time, racial segregation is commonly known in the United States, and African-American people are in great hardships. Scout, a Caucasian girl, struggles her childhood because she does not understand why people are disliking her father, a Caucasian lawyer, who helps an African-American man. Because many of them do not like her father supporting a colored man, Scout’s family gets several threats. The charged man’s name is Tom Robinson, and he is convicted of raping a white girl, Mayella Ewells. Through Atticus’s cross-examination with Mayella Ewells, he sees that the girl’s own father, Bob Ewells, has beaten her, instead of Tom. He tries to defend Tom by showing the jury that Mayella and Bob are not telling the truth about what exactly happens. Despite Atticus’s considerable efforts and emotional speech in the trial, the jury decides that Tom is guilty because he is a “Negro.”After the verdict, Tom figures out that he will be in jail for a long time for something he does not commit. When he goes back, he eventually makes a decision of getting himself killed by trying to escape, rather than spending his life at prison.

MY OPINION:
When I read the first page of the book, I did not understand what the narrator was talking about until I reached the end of the story. The story was very sad and emotional because if I was in an African-American man’s perspective, I would think that the world was a cruel and injustice place. The vocabularies the author managed to use made the story even more dramatic which was something I enjoyed. Though sometimes, the vocabularies in the book were too hard to comprehend, which was a weakness. There were some confusing sections in the book where I had to reread several times to let it set in my mind. Because of the complex parts and vocabulary choices in the book, I would recommend this book for younger high school students or older middle school students who want to read it as a challenge. Overall I would give this book a ten out of ten stars because I loved how the book was structured and the author’s main point toward the readers.

FIRST SECTION
1. Why does Scout only live with Atticus and Jem?
1a. Scout’s mother dies from a sudden heart attack when Scout is two. (pg. 6)

2. Why does Calpurnia make crackling bread for Scout?
2a. Calpurnia wants to apologize to Scout for going too hard on her by making her favorite bread. (pg. 32)

3. What are the two reasons Scout wants to quit the game?
3a. The first reason is because she rolls into the Radley front yard, and the second reasons is because of Atticus’s arrival. (pg. 45)
4. What happens to the knot-hole?
4a. Mr. Radley fills up the knot-hole with cement because the trees are “dying.” (pg. 70)
5. Whose blanket does Scout carry when she’s near the Radley’s house and watching the fire with Jem?
5a. Scout does not know how she has the blanket, but Atticus tells her that Boo Radley probably put it around her when she was too busy looking at the fire. (pg. 82)

MIDDLE SECTION
6. What does Jem buy himself and Scout after his twelfth birthday?
6a. Jem brings himself a miniature steam engine and a twirling baton for Scout. (pg. 116)
7. Why is Lula mad at Calpurnia?
7a. Calpurnia brings Jem and Scout, who are caucasian, to an African-American church. (pg. 136)
8. Why is Tom Robinson in jail?
8a. Mr. Bob Ewells accuses him of raping his daughter, Mayella Ewells, and has him arrested. (pg.140)
9. Who are the Ewells?
9a. The Ewells are always on welfare, and they live behind the town garbage dump in what is called a Negro Cabin. (pg. 193)
10. Who does Atticus think raped Mayella Ewells?
10a. Atticus thinks Bob Ewells, her own father, has beaten her up, but Mayella is not telling the truth. (pg. 213)

LAST SECTION
11. Why does Mr. Gilmer “seemed ready to rise to the ceiling?”
11a. Tom Robinson accidentally says, “…I felt sorry for her…”, which he should not, have when Mr. Gilmer cross-examines him. (pg. 224)
12. What does Miss Stephanie tell Scout and Jem when they are about to leave Miss Maudie’s house?
12a. She tells them that Mr. Bob Ewell stopped Atticus on the post office corner, spat on him face, and told him that he would get him if it took the rest of his life. (pg. 247)
13. How does Tom Robinson die?
13a. Tom Robinson is shot seventeen times by the guards at prison when he goes over the fence and tries to escape. (pg. 268)
14. Why does Mr. Link Pea threaten Mr. Ewell?
14a. Mr. Ewell has something against anyone who is connected to the case, and he is not leaving Helen alone. (pg. 285)
15. Why does Boo Radley carry Jem and Scout stumble home?
15a. When Scout and Jem are walking home at night, Mr. Ewell tries to kill both of them, but Mr. Arthur saves them by stabbing Bob Ewell. (pg. 301)